Lenny Kravitz Keeps Promise, Back in Bulgaria in Sept 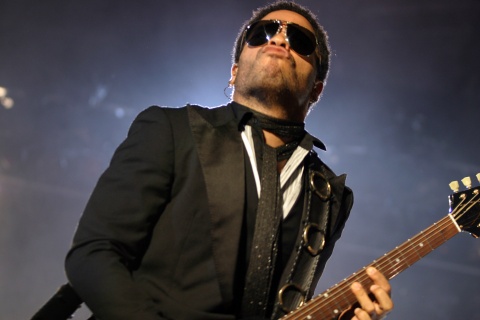 Lenny Kravitz is pictured here during his stunning first gig in Sofia in July 2008. Photo by Sofia Photo Agency

Lenny Kravitz, the world famous singer and multi-instrumentalist, will be back in Bulgaria in September, just as he promised his exalted fans here four years ago.

The American singer and songwriter will play a second gig in the Bulgarian capital Sofia on September 30, event organizers Joker Media said on Friday.

The musician, who has won four consecutive Grammy awards for best male rock vocal performance in 1998-2001 and has successfully mixed numerous styles of music, including rock, funk, R&B, jazz and soul, will play at Arena Armeec hall.

The gig will be part of Kravitz' world tour to promote his ninth album Black and White America and will feature both songs from his new album and some of his best-known hits.

Back in 2008 about 18,000 Bulgarians enjoyed the stunning concert of Lenny Kravitz. The warm welcome of the audience inspired the musician to perform his greatest hits along with the melodic singles from his newest album "It Is Time for Love Revolution".

"I love you, Bulgaria! I cannot believe it took me 19 years to visit you but I promise to come back," the message of the star to the exalted audience said.

"American Woman", "I'll Be Waiting" and "Fly Away" were only a small part of the songs the Bulgarians sang together with the star.

Lenny Kravitz delighted the fans also with his performances of other music stars' hits, Pink Floyd's "Another Brick in the Wall" and Michael Jackson's "Billie Jean" among them.

The singer even went behind the enclosures so that he was nearer the fans, who had been waiting for hours in front of the stadium to take their places at the first row of the crowd.

The final of the great show was reserved for the golden hit "Are You Gonna Go My Way" and the fresh "Love Revolution" as Kravitz then sat behind the drums.