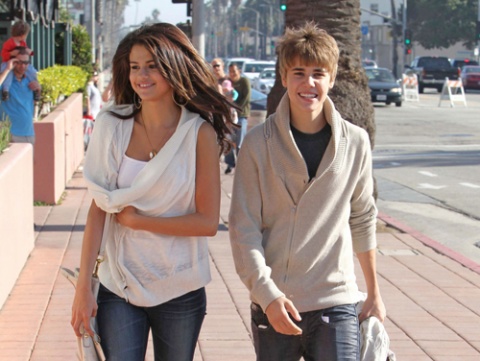 US starlet Selena Gomez and her just as famous boyfriend Justin Bieber. Photo by weareselenators

Bulgaria's teens have gone crazy with excitement over the stay of US starlet Selena Gomez and recent rumors that Justin Bieber may also be coming to the Balkan country for the weekend.

The 19-year-old starlet has been to Bulgaria's capital Sofia for less than a week but some of her luckiest fans already managed to meet her and snag a picture with her.

Even though the name of the hotel Selena is staying at has been kept secret, local Selenators quickly unraveled the mystery and lined up outside the building hoping to just snatch a glimpse.

Meanwhile reports emerged suggesting that Selena's boyfriend and star Justin Bieber is due to visit her this weekend in Bulgaria.

According to a report from Hollywood Life, a question about Mother's Day came up during a recent Extra interview. When asked how he was going to spend the weekend, the Biebs said:

"I'm not going to be with [my mom], which will suck. I think I'm going to be out of the country."

It is still an open question however whether Bieber will travel 7,000 miles to be with Selena.