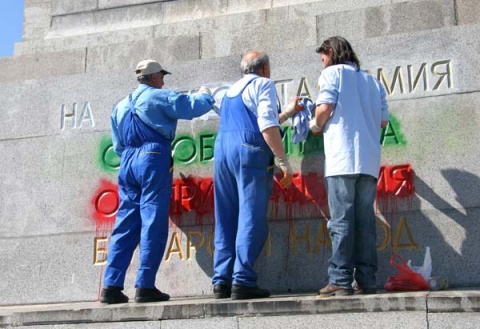 Employees of the company "Egida" were spotted cleaning the Monument of the Soviet Army in downtown Sofia after it was painted with Bulgaria's national colors overnight. Photo by e-vestnik

The monument of the Soviet Army in downtown Bulgarian capital Sofia "woke up" Tuesday morning painted once again, this time in the colors of the country's national flag – white, green and red.

Elements and parts of the monument were spray- and brush-painted in the three colors in the eve of the Day of Europe and the Day marking the End of World War II.

The City Hall has been notified about the incident in the wee hours and immediately dispatched a cleaning company to remove the paint. Employees of the company have been spotted in the morning cleaning the bas-reliefs of the monuments with gasoline.

In November 2011, the Red Army soldiers were painted wearing the mask of Guy Fawkes, symbol of the global protest against ACTA.

In June 2011, a group of street artists painted the bronze figures of Soviet soldiers to represent various US pop culture characters, turning them into The Joker, Wolverine, Santa, Superman, Ronald McDonald, Captain America, Robin, and Wonder Woman, among others.