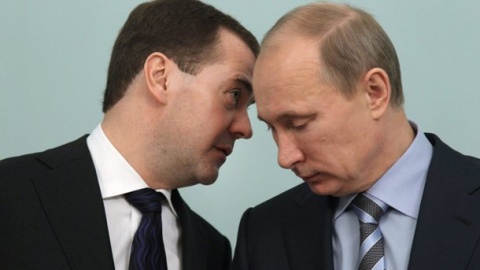 During his entire presidential term, Dmitry Medvedev (l), was overshadowed by PM Vladimir Putin (r), with the two now switching posts once again. Photo by BGNES

Vladimir Putin, who was inaugurated for the third time Monday as President of the Russian Federation, has nominated his predecessor Dmitry Medvedev to become Prime Minister.

The news was reported by the speaker of the Duma (the lower chamber of the Parliament), Sergey Narichkin, cited by Russian media and the Bulgarian news agency BGNES.

Meanwhile, the Russian cabinet that was led by Putin until midnight Sunday, before him being sworn in office as President, has resigned as postulated by the Constitution.

Medvedev, who ended his four-year term as President, must now begin the procedure of becoming Prime Minister by meeting the leaders of the political parties that have representation in the Duma.

The emergency meeting to confirm the PM appointment is scheduled for Tuesday morning.

During his entire presidential term, Medvedev was overshadowed by PM Putin. The latter left Kremlin in 2008 to lead the cabinet because he had already served two terms in office as president and Russia's Constitution bans one same individual to run for the third time after serving two consecutive terms.

Putin won the March 2012 presidential elections at first round with 64% of the votes.

As the BBC's correspondent in Moscow has pointed out, the new six-year term will make Putin the longest serving Russian leader since Joseph Stalin.

Meanwhile, the Russian Police made 120 arrests as some 200 people, including Yeltsin-era deputy Prime Minister Boris Nemtsov, protested Putin's return to the presidency at separate locations near the Kremlin.