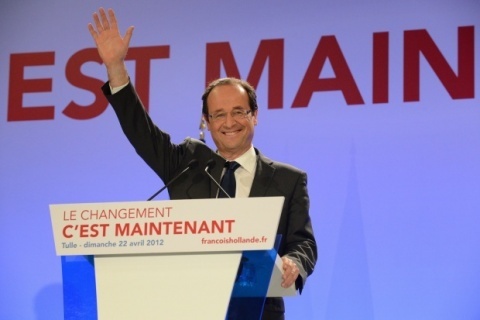 Socialist candidate Francois Hollande is set to win the May 6 run-off of the presidential elections in France, according to a Belgian paper. Photo by BGNES

According to the French Interior Ministry, the voter turnout was 30.66% at noon, some 2% higher than in the first round.

Both Hollande and Sarcozy have already cast their ballots.

Sarkozy is facing his Socialist challenger, Francois Hollande in the run-off of the French Presidential Elections, with Sarkozy trailing Hollande by 6 percentage points in polls Friday.

After eight other candidates were eliminated in the first round on April 22, Hollande has led Sarkozy in every poll conducted throughout the campaign.

Hollande has promised to renegotiate the European Union's "fiscal pact," which sets tight budget rules, and he called for a "growth pact" to stimulate stagnant economies and add new jobs.

The choice that French people make will affect France and the European Union and its attempts to manage the eurozone debt crisis. France is also a permanent U.N. Security Council member and nuclear power and has troops on missions abroad, from Afghanistan to Congo.