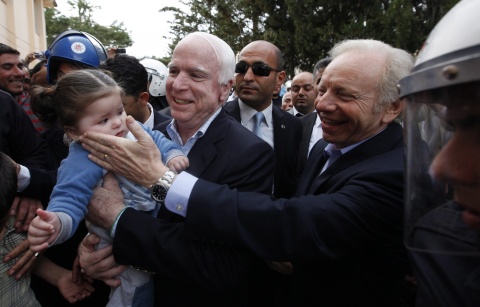 US Senators John McCain (L) and Joe Lieberman (R) greet Syrian refugees during their visit to the Yayladagi refugee camp in Hatay, on the Turkish-Syrian border in Turkey 10 April 2012, a day after the cross-border incident of April 9. Photo by EPA/BGNES

The Syrian Foreign Ministry has accused Turkey of provocation with its talk of asking NATO to help protect its border with Syria, saying such action went against the UN-backed peace plan.

"It is disturbing that Erdogan threatened to bring in NATO to protect its borders with Syria. This demonstrates a lack of a genuine commitment to the terms of the (Kofi) Annan plan and policies of good neighborliness," he added.

Makdisi also accused Erdogan of hosting armed groups "that do not believe in the political process".

As it first start in March 2011 amidst the Arab Spring upheaval in other Arab countries, the civil unrest in Syria against the regime of President Bashar al-Assad has been going on for more than a year now.

On April 9, four Syrian refugees and two Turks, a policeman and a translator, were wounded in the Kilis refugee camp in southeastern Turkey when they were hit by gunfire from across the border.

When asked on April 12 what Turkey's response would be to conflict spilling over the Syrian-Turkish border, Erdogan responded by saying that "we have several options."

NATO action, however, requires unanimous support from members of the North Atlantic Council, the decision-making body of the group.

Turkish Foreign Minister Davutoglu too said Thursday that Turkey is considering "all possibilities in order to protect national security" if the violence continues to bring tens of thousands of Syrian refugees into its territory.

The media interpreted this as a possible declaration of a buffer zone along 900-km Syria-Turkey border for sheltering refugees.

In its statement, the Syrian Foreign Ministry announced that any Syrian refugee in Turkey will have full guarantees of his safe return and that Damascus is ready to cooperate with the Turkish Red Crescent to achieve this goal.