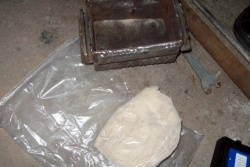 Photo by the press office of the Interior Ministry

The joint operation conducted by officers of the local GDBOP unit and police officers from the southern Bulgarian city of Plovdiv resulted in the arrest of eight suspected of trafficking heroin and synthetic drugs on the route Turkey-Bulgaria-Kosovo-Italy-Switzerland.

According to a statement of the press office of the Interior Ministry, the cooperation with the regional office of DEA contributed substantially to the successful criminal investigation and the arrest of the organizers and the members of the crime group.

The US Drug Enforcement Administration (DEA) opened its first office in Bulgaria in the beginning of April.

In a garage in downtown Karlovo, anti-mafia police arrested a 31-year-old Albanian permanently residing in Bulgaria, a Serbian national and two Sofia citizens aged 67 and 71.

The four were caught while they were processing and packaging a total of around four kilos of heroin.

Right after the arrest, the police officers detained the organizers of the drug trafficking scheme, two Serbian nationals.

One of them had been banned from entering Bulgaria in 2005 and was found to be using fake ID documents.

Hours later, the police officers arrested two other suspects, a 48-year-old woman and a 37-year old man, both of them Bulgarian.

In the course of the investigation, the anti-mafia officers also seized some 100 grams of heroin, a kilogram of synthetic drugs, 200 grams of ephedrine, synthetic drug precursors, specialized equipment and a van with slots for hiding drugs.