Ex Tsar Saxe-Coburg: Getting Bulgaria in EU Made Me Become PM 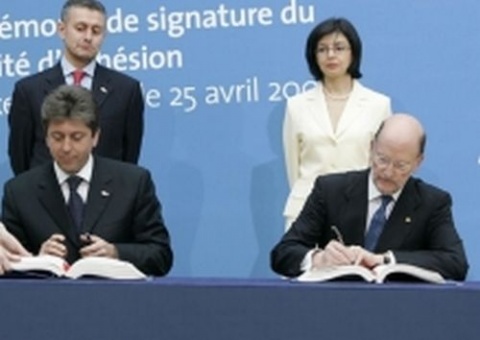 Bulgaria’s ex Tsar and ex Prime Minister Simeon Saxe-Coburg has published an article claiming that his primary motivation for “accepting” to head the Bulgarian government in 2001 was to make the country an EU member.

The article in question appeared on Saxe-Coburg’s website on Tuesday, April 24, apparently intended to note the anniversary since the signing of Bulgaria’s EU accession treaty seven years ago, on April 25, 2005.

Ironically, in his capacity as Prime Minister of Bulgaria in 2001-2005, Saxe-Coburg, who was the last Tsar of the Bulgarians in 1943-1946 as a minor, before his family was exiled by the communists, signed the Bulgarian EU accession treaty together with the country’s President Georgi Parvanov, a former head of the Bulgarian Socialist Party, the descendant of the Bulgarian Communist Party.

In his article Tuesday, Saxe-Coburg explains that back in April 2005 he insisted on the signing of Bulgaria’s EU accession treaty as soon as possible even though some of his aides were in favor of a later and grander signing ceremony.

“We all know that change in the mood in the EU after the referendums [on the EU Constitution Treaty] in France and the Netherlands, and the tangible danger of postponing completely the signing of the accession treaties with Bulgaria and Romania,” the ex Prime Minister of Bulgaria recalls.

“For me, Bulgaria’s EU accession was not only our main national goal but, honestly speaking, it was also the very motive for me to accept the Prime Minister’s post in 2001. Knowing, however, that the trust that I have in the international circles will help, I undertook this hard mission for me and my family. After a 50-year exile being able to work from here for the well-being of my compatriots – this was more important than anything,” Saxe-Coburg claims.

“On April 2005, during the actual signing of the Treaty, of course, I felt an indescribable emotion. I should not miss the opportunity here to declare my great gratitude for the Grand Duke of Luxembourg as well as the Prime Minister Jean-Claude Juncker,” he adds.

“It was additional delight for me that Bulgaria was also represented, as I believed that it should, by its President (i.e. then President Georgi Parvanov – editor’s note), regardless of the opposition by certain circles. During this fateful decision for all citizens, the strengthening of statehood was an important prerequisite for success,” argues the ex Tsar.

Even though he won the Bulgarian general elections in a landslide a couple of months after returning from exile in 2001, Saxe-Coburg’s record as Prime Minister and head of his party, which was first name “National Movement Simeon the Second”, and was later renamed to “National Movement for Stability and Prosperity”, remains controversial, with many Bulgarians being outraged by the fact that he has gotten in a court battle with the Bulgarian state over the ownership of the former estates of the Bulgarian royal family, which were snatched in the 1940s.

Many in Bulgaria actually tend to believe that Saxe-Coburg's return to Bulgaria was motivated by the former royal estates, and the need to prop up his family finances - allegations that he seems to be refuting indirectly with his Tuesday's statement dedicated to the anniversary of the signing of Bulgaria's EU accession treaty.