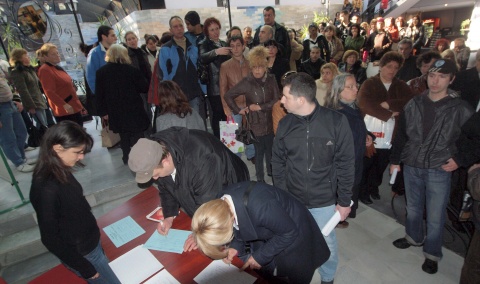 The number of people who found a job abroad through Bulgaria's Employment Agency is expected to top 1000 people in 2012, according to the EA's press office.

Experts of the EA note that in 2011, over 260 people went to work in Germany, France and Switzerland thanks to bilateral agreements and work agreements.

Labor mediation for employment abroad is carried out within the frames of existing bilateral agreements and cooperation agreements with other public employment services within the EURES (European Employment Services).

In 2011, a total of around 450 Bulgarians found jobs abroad thanks to EURES.

The majority of contracts were seasonal employment contracts in agriculture and tourism.

Spain, Germany, Denmark and Austria attracted the largest number of workers, according to data of the EA.

A total of 224 companies in Bulgaria have a registration and a certificate for employment intermediary services.

Of all 224 overseas employment intermediary agencies, however, only 16 have a registered agency agreement with a foreign employer, which guarantees that job-seekers will not be cheated, EA officials say.

In cases of an breaches in the intermediary process, complaints and tip-offs are to be submitted with the Executive Agency "Chief Labor Inspectorate".