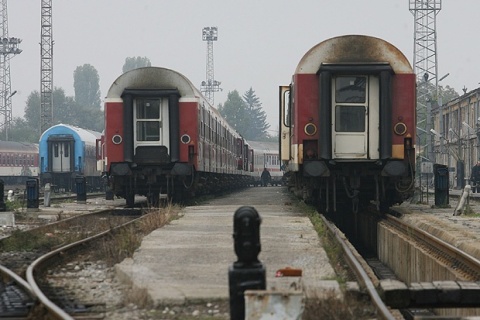 Senior officials of the Freight Services unit of the Bulgarian State Railways (BDZ) have uncovered fuel thefts carried out at the locomotive equipment point in the southern town of Svilengrad.

A sudden inspection of the site was conducted late on Saturday by Plamen Dzhurov, head of the Freight Services department of BDZ and Ivaylo Ivanov, Co-Manager of Freight Services.

In a Sunday interview, Dzhurov specified that there had been tip-offs about and organized group of BDZ officials from Dimnitrovgrad, Svilengrad, Harmanli and Simeonovgrad draining fuel from locomotives on the territory of Kapakule in neighboring Turkey.

The check revealed 35-40 liter plastic tanks of in the lockers of the locomotive machinists, as well as 10-12 liter bottles of mineral water filled with fuel.

The total volume of BDZ-owned fuel found during the inspection was 120 liters.

The lockers were also found to contain a range of hoses, taps, gloves, etc, all of which pointed to a well-coordinated crime scheme.

Dzhurov told journalists that the region of Svilengrad and Dimitrovgrad brought losses of 30-50 tons of fuel over-expenditure.

Another Saturday night operation detected fuel thefts at the locomotive depot in the southern town of Dupnitsa.

The lockers of the employees were found to contain 59 liters of fuel contained in plastic bottles.

One of the guards of the site was revealed to have 15 liters of fuel that had most likely been drained from a machine or a tank truck located near the depot.

The investigation of the case continues.