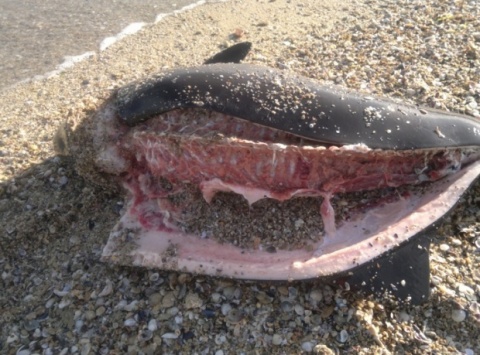 A slaughtered dolphin was washed ashore near Nesebar two days ago. Photo by bivol.bg

A count of Black Sea dolphins should start in a month, according to Dragomir Gospodinov, Executive Director of the Fisheries and Aquaculture Executive Agency (FAEA).

"We know that fishers say that there are too many dolphins that are causing huge damages to nets and traps. The only thing that can be done is to count the dolphins in the Black Sea aquatory and to address the European Commission about some sort of compensations for the damages suffered by the fishermen," Gospodinov explained Friday in the southern resort of Tsarevo.

The counting, the most essential part of the campaign, would be conducted by specialists from the Institute of Fishing Resources in Varna, the FAEA CEO specified.

He rejected claims that the two dead dolphins washed ashore in the past few days had been killed by Bulgarian fishermen, saying that it was considered a bad omen and that the waters were also being used by foreign fishermen.

Earlier on Friday, Agriculture Minister noted that killing dolphins was an exceptionally ugly act and that fishermen were not guilty of it.

After the last cases of murdered dolphins, Gospodinov tasked FAEA inspectors in Burgas, Varna and Dobrich to inspect the coastline for other killed sea mammals.

"The operation took two days and no other dead dolphins were found. Teams from all over the country will now be dispatched to the coast to participate in control groups," the Chief Executive of the FAEA informed.

Under recent amendments to Bulgaria's Penal Code, killing a dolphin is a crime that carries a penalty of one to three years of imprisonment and a fine of BGN 1000 – 10 000 for animal cruelty.

Apart from that, dolphins are listed in the Red Book as endangered species and their hunting is illegal.

Gospodinov further explained that Bulgaria had promised the EC to impose tight control to ensure that the ban on turbot fishing was being observed.

He said that the stringent supervision had resulted in the seizure of 1600 kg of illegal fish, compared to 27 kg for the previous year.

Naydenov's statement revealed that Maria Damanaki, European Union Commissioner for Maritime Affairs and Fisheries, had vowed technical assistance for the purchase of cutters and other facilities.

"This is something that the state can do but the fishing community ought to be more vigilant because fishermen outnumber inspectors by far," the Agriculture Minister commented.

Gospodinov in his turn argued that 6 to 7 cutters would suffice to ensure tight control over a coastline of 360km.