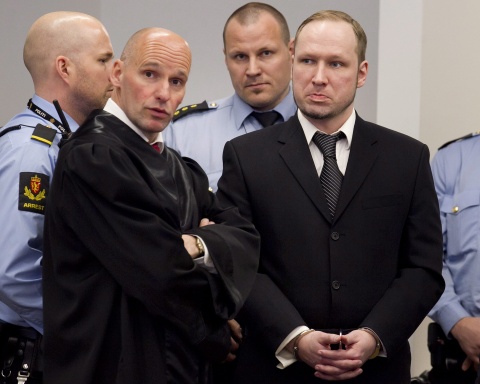 Defendant Anders Behring Breivik (R) with his lawyer Geir Lippestad (L) is seen during the third day of proceedings in courtroom 250 in the courthouse in Oslo, Norway, 18 April 2012.

Norwegian mass murderer Anders Behring Breivik took a year's sabbatical from 2006 because he was planning a "suicide action", it emerged on Thursday.

He said he told his mother he was "going to allocate time to do what I wanted to do", explaining that he couldn't tell his mother that he was taking a sabbatical because he was going to "blow himself up in five years' time."

He told the court that he spent the year playing the online role-play game, World of Warcraft, for up to 16 hours a day. The mass killer stated this activity had nothing to do with what happened on July 22 and was merely a "hobby."

However, he did reveal that he used the game Call of Duty: Modern Welfare 2 to train himself how to use weapons, dagbladet.no infoms. Breivik pointed out that the game used for that purpose by armed forces in other countries.

The mass murderer was smiling as he stated that the game helped him perpetrate the Utoeya massacre.

The court heard that Breivik formed a company in the Bahamas that he used as a front for money-laundering, BBC says. The funds were intended for nationalist activities.