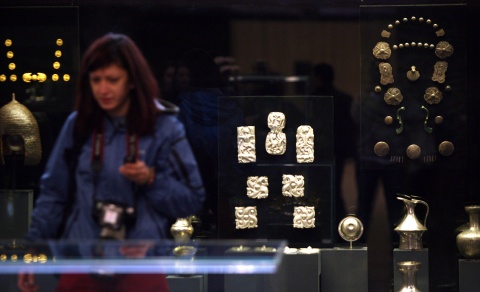 Nikolay Mindov says that the enty fee of BGN 10 for the National Museum of History is unaffordable for many Bulgarians. Photo by BGNES

The Association of Bulgarian Tour Guides (ABTG) has suggested that Bulgarian tourists should pay lower entrance fees for museums and cultural sites than foreigners.

The ATBG also calls for the introduction of combined cards for public transport and tourist attractions in a bid to attract more visitors to Bulgaria's capital.

According to the Association, the fact that Bulgarians receive much lower salaries than foreign visitors of the country is reason enough to o charge lower prices for local residents.

Nikolay Mindov, Chair of the ABTG, argues that Bulgarian tourists cannot afford to pay BGN 10 to get into the National Museum of History in Sofia.

Mindov adds that the National Museum of History should be moved from the Boyana residential district to a more central location in Sofia because it is currently inaccessible for a major portion of the tourists.

"This is a common practice all around the world. When a tourist goes somewhere, they are given preferential opportunities to look around. There should be such cards allowing them to use public transport and not worry all the time about tickets," Mindov suggests.

He observes that visitors of Sofia are most often disappointed by problems that are all too noticeable to the locals like pollution and stray dogs.

The ATBG Chair says that a tourist from Europe got bitten by a stray dog during his stay in Sofia.

"There's garbage on the streets. This is one of the things that disappoint tourists who see this all over town. Why do we not see strays walking along the streets in Vienna, for instance? Here in Sofia there are stray dogs on every corner. Many tourists are afraid to go out of the hotel because of the dogs," Mindov notes.

The ATBG also calls for opening the Parliament for visits of foreign tourists, making the the change of guards in front of the President's Office longer and more attractive at least once a week and introducing a one-hour tour of Sofia by tram.