Code Yellow in South Bulgaria Due to Spring Storms 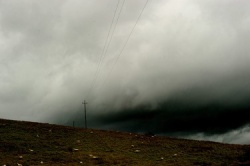 A code yellow for potentially dangerous weather has been declared in for regions of southern Bulgaria due to the possibility of heavy storms Saturday.

Code yellow has been called in Blagoevgrad, Smolyan, Kardzhali and Haskovo region, where storms might involve thunder and hail with high winds.

The remaining parts of the country will also experience cloudy weather and precipitation, but less intensive, stated the National Institute of Meteorology and Hydrology.

Highs Saturday will reach 17-22 degrees Centigrade at most places, while for capital Sofia they will be 16-17 C.

On the Black Sea coast the weather will be cloudy, with some rain and south-eastern winds, highs varying between 14 and 21 C.

The weather in Bulgaria's mountains is set to remain unstable with high winds reaching hurricane speeds on the tops of ranges.