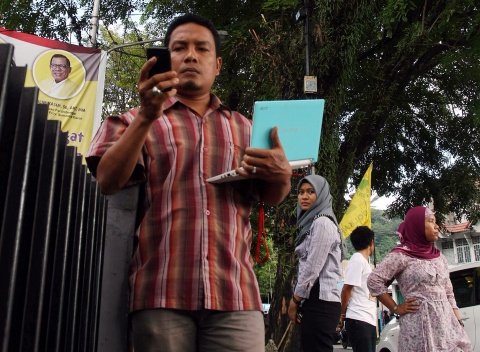 An Indonesian resident tries to call his family as others stay outside after a 8.5 magnitude earthquake rocked Padang, West Sumatra, Indonesia, 11 April 2012. EPA/BGNES

A few thousand people have been evacuated to higher ground from parts of India's Andaman and Nicobar islands on Wednesday following the two massive earthquakes off the coast of Indonesia.

Andaman and Nicobar prepared for tsunami waves up to 3.9 meters high, officials said, as cited by Emirates 24/7.

"There could be high waves of 1.5 metres at Port Blair and 3.9 metres at Campbell Bay," said Prabhakar Rao, the official in charge of the disaster control room at Port Blair, the main town on the islands.

He added that small waves about half-a-meter high and within normal tide limits had already washed into the Campbell Bay area on the Great Nicobar island.

India on Wednesday added the coastal states of Kerala, Orissa, Goa and West Bengal to a tsunami warning along with Andhra Pradesh and Tamil Nadu.

A more urgent "red alert" warning was earlier issued for the Andaman and Nicobar Islands.

An 8.6 magnitude earthquake struck about 500 kilometers from Indonesia's Aceh province on Wednesday, triggering a tsunami alert. An aftershock with a preliminary magnitude of 8.2 followed, shaking Sumatra's western coast and prompted Indonesian authorities to issue a fresh tsunami warning.

Banda Aceh was devastated by a tsunami resulting from an earthquake in December 2004. Over 230,000 people in fourteen countries were killed in the 2004 Indian Ocean tsunami.