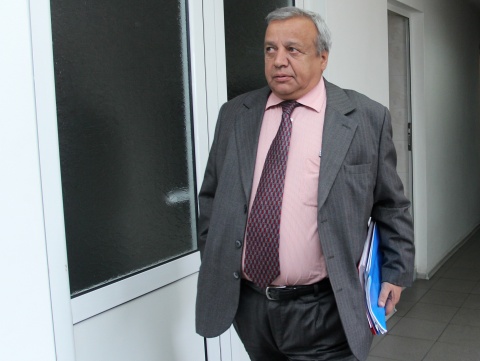 Pictured: The soon to be former owner of the Lead and Zinc Complex in Kardzhali Valentin Zahariev. Photo by BGNES

The three likely buyers of the highly-troubled metallurgical giant – which is Bulgaria's major producer of non-ferrous metals – are two foreign companies and one Bulgarian firm, Djankov said but refused to reveal their names.

He did say, however, that in the most optimistic scenario the Lead and Zinc Complex in the southern Bulgarian city of Kardzhali, which has experienced labor unrest over unpaid salaries, can be sold to a new owner in 10-15 days.

Speaking at the Makaza Pass on the Bulgarian-Greek border near Kardzhali, Djankov explained that he has order an all-out tax inspection of the finances of the plant current owner, Bulgarian oligarch Valentin Zahariev, owner of Intertrust Holding, and his two sons.

The Finance Minister added, however, that it is still possible to manage the Lead and Zinc Plant in Kardzhali with the formation of an international management team from the creditor-banks.

"A declaration of insolvency for the OTZK is not a good option as a long term solution. It will be an year and a half before all financial compensation claims are met in this scenario – including the workers' claims," Djakov stated as cited by Darik Radio.

Last wekend the workers from the highly troubled Lead and Zinc Complex (LZC; OTZK) in Bulgaria's southern city of Kardzhali received meager one-time cash payments from the government but remain ready to strike.

A total of 519 employees of the Lead and Zinc Complex in Kardzhali, the leading Bulgarian non-ferrous metals producer, who had not received salaries for half a year, got BGN 325 each, provided by the Bulgarian Social Assistance Agency.

Last week, the workers filed personal claims in Court against the owner of the plant, Bulgarian oligarch Valentin Zahariev, who is also know for mismanagement of what used to be the largest steel-maker in Bulgaria, the now bankrupt Kremikovtzi plant near Sofia. They demand the replacement of the entire management, starting with him.

The Lead and Zinc Complex is owned by Zahariev, the now-former owner of the Gorubso Madan metal mines. Gorubso Madan miners finally received their overdue wages on Saturday after they had been staging protests for two weeks.

It was announced a week ago that businessman Nikolay Valkanov will be taking over the concession of the Gorubso Madan metal mines from Valentin Zahariev. Valkanov is a former VP of Multigroup, and currently owns "Minstroy" and Gorubso Zlatograd, another mining company in Southern Bulgaria, and has a concession of the "Varba" mine.

Speaking on Friday at the Makaza Pass, Finance Minister Djankov said the new owner of Gorubso Madan is not among the three bidders for the purchase of the Kardzhali Lead and Zinc Complex.