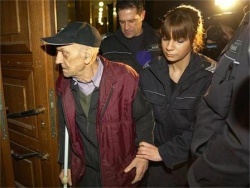 Iliya Nikolov has been dubbed the great combinator and the Bulgarian Ostap Bender. Photo by 24 Hours

A 78-year-old prisoner, whose scandalous testimonies framed former senior prosecutor Nikola Filchev during the trial over the mysterious murder of a young and beautiful lawyer, has died.

Iliya Nikolov, known as the great combinator and the Bulgarian Ostap Bender, passed away after losing his battle with cancer, local media reported.

The news came just a month after Nikolov complained he has been misled after striking a deal with prosecutors and revealing the mysterious murder of a young and beautiful lawyer, committed back in 2000.

"When they need information, they come to me and ask me all kinds of questions. But when it comes to keeping their promises, they vanish into thin air," complained to the doctors in Sofia jail.

Doctors were to prove whether the elderly man, who has spent most of his life in jail, is in good mental and physical health and can be a reliable source of information.

Iliya Nikolov aka the Nut took the witness stand at the end of last year only to back the widely floated version that Nikola Filchev, Bulgaria's controversial and erratic former senior prosecutor, has masterminded the gruesome murder of Nadezhda Georgieva exactly twelve years ago. Nikolov once shared a cell with Plamen Kalajdzhiev, one of the defendants in the trial, whom he cites as the source of his information.

The new witness appeared in the court room in the middle of February as he court saga over the murder, which has stretched over more than a decade already, was resumed.

The UK Supreme Court ruled against the extradition of the defendant last year, triggering a furious controversy in the Balkan country.

According to the court there is sufficient evidence to probe a possible connection between the murders of Nikolay Kolev and Nadezhda Georgieva.

The new witness, who has spent a quarter of his life in jail, claimed Georgieva, Kolev and Filchev were involved in shady dealings, including drugs trafficking.

Previous witnesses have claimed that prior to the murder Nadezhda Georgieva was handed USD 150 000 to give to Filchev as a bribe to make him stop an investigation against the state-owned deep-sea fishing company.