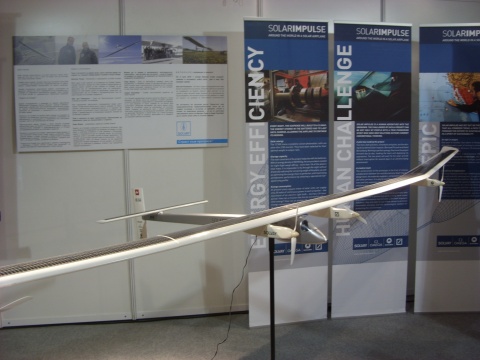 The model of Solar Impulse, first fully solar-powers airplane, has been presented at the International Exhibition of Solar Energy for South East Europe in Sofia by Solvay.

Solar Impulse is the first and only plane in the world powered entirely by solar energy, which carries out flights in daylight as well as at night without using fuel and releasing harmful emissions, the company announced.

At the International Exhibition on Solar Energy, Solar Impulse project in Sofia on March 28-30 was presented by Eng. Martin Gutsuzyan from Solvay Sodi, who, besides the interesting details about the idea and its innovative spirit, spoke of the basic technical characteristics of the airplane: wingspan – 63.4 m, length - 21.8 m, weight - 1600 kg with a pilot on board, maximum altitude - 8.5 km; area of photovoltaic elements - 200 square meters, 4 batteries, which are able to maintain the airplane in flight at night, average daily production capacity of electric power - 250 W / mh, etc.

In 2010, the Solar Impulse airplane made ??its first 24-hour flight powered solely by the sun. Yesterday, 28 March, it was announced that in May this year Solar Impulse will make a 48-hour flight of 2,500 km from Switzerland to Morocco, with a stopover in Madrid for replacement of the pilots Bertrand Piccard and Andr? Borchberg who are the initiators of the project. This will be the longest flight of the plane which is a preparation for its round the world flight in 2014.

SOLVAY is included in the project from the very beginning in 2004 as a main technological partner and sponsor, providing 25 applications, 11 products and 6000 details for the plane. Chemists and physicists from laboratories of Solvay in Germany, Belgium and Italy design and develop innovative technical solutions based on high-tech materials. This project exemplifies Solvay's contribution in the field of sustainable development and searching of renewable alternative energy sources, the company has pointed out.

SOLVAY Group has 30 000 employees in three sectors of activity: Solvay Chemicals, Solvay Plastics and Rhodia; the Group is a global leader in chemicals with 12 billion sales in 2010.