4 of 9 Bulgarian 'Impudent' Get Jail Time for Kidnaps 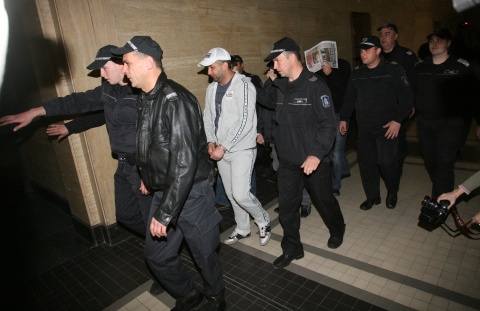 Some of the alleged "Impudent" gang members, are seen here escorted by the police Monday on way to hear their sentences. Photo by BGNES

Four of a total of nine defendants in Bulgaria's high-profile trial against the so-called Impudent group, accused of a dozen of abductions, received guilty verdicts Monday.

The verdicts were pronounced by a five member panel of magistrates from the Sofia City Court, after a year-long investigation and 15 months of Court sessions.

Ivaylo Evtimov AKA Yozhi, Prokopi Prokopiev AKA The Bodybuilder, and Daniel Dimitrov AKA The Relay were found guilty of racket and organizing a kidnap gang, and were sentenced to 18 years behind bars each, while Lyubomir Dimitrov AKA The Rower faces 15 years in prison.

Brothers Radoslav and Mitko Lebeshevski were declared not-guilty on abduction charges and sentenced to one year suspended sentence for illegal possession of weapons; Pavel Petkov, and Tsvetozar Slavchev were exonerated in full over the lack of evidence against them.

The prosecution has accused the group of 12 kidnappings, up from the initially reported 11, but failed to prove the Impudent's involvement in the abduction of college student Rumen Guninski.

The recently murdered Kiril Kirilov AKA Shkafa (The Commode) had also been part of the gang, however, charges against him were dropped after his death. Two other gang members, Nayden Naydenov, and Valentin Mihov, have not been tried because they are protected witnesses and have testified against the other kidnappers.

The sentence can be appealed before the Sofia Appellate Court within a 14-day deadline.