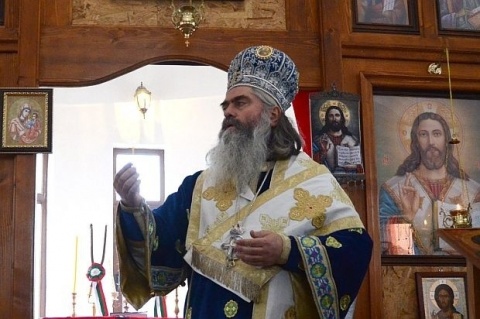 Varna Bishop Kiril was recently exposed as as agent of the Communist State Security. Photo by DarikNews

Varna Metropolitan Kirill will submit his resignation before the Holy Synod no later than Easter.

The news was reported Sunday by Darik radio, citing people who say they heard Kiril make the statement during the mass he led at the city's cathedral.

The Bishop laconically told the surprised laymen that the decision is final and is motivated by his disagreement with certain positions of the Synod.

Kiril pointed the same reasons for leaving four months ago. Information about his intention to resign circulated widely and was published after he stirred outrage by appearing before his congregation on St Nikolay Day in a brand new Lincoln MKZ Hybrid car, bragging that only he and US President Obama have such vehicle. The news was denied on the grounds that the Bishop has only voiced such desire before the Synod, but has not and will not officially resign.

According to Darik, this second request stems from his weakened positions among senior clergy after he was exposed as agent of the Communist State Security, DS, working under the aliases "Kovachev" and "Vladislav."

Until 2010, the Varna Bishop traditionally led the Bulgarian delegation bringing from Jerusalem the Holy Fire for Easter. This year, for the second consecutive time, he is not even included in the delegation while Plovdiv Bishop Nikolay is once again designated as its leader.

In January, Bulgaria's so-called Files Commission – a panel investigating the Communist era secret files, exposed eleven out of a total of fifteen Bulgarian Metropolitan bishops as former agents of the Communist State Security. Nikolay is one of the four whose name came clear.

Darik had called Kiril for comment, but his cell phone was switched off, as it is customary for journalists to not been able to reach him after any scandal in which his name has been involved.