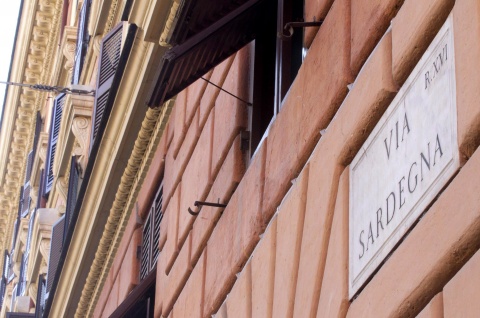 View of a sign indicating the street where one of the apartments believed to have been owned by Muammar Gaddafi was seized by the Police in Rome, Italy, 29 March 2012. EPA/BGNES

A total of EUR 1.1 B of assets belonging to family members of Libya's late strongman Muammar Gaddafi have been seized by Italy's tax police.

The assets will be administered by a special commissioner to be appointed by a Rome court, Lieutenant Colonel Gavino Putzu has explained, as cited by international media.

Libya had built up a 7.5 stake in Unicredit, sparking outrage that a North African rogue tyrant could have a powerful voice in Italy's largest bank. It cost Unicredit chief executive Alessandro Profumo his job.

Muammar Gaddafi was captured and killed by Libyan rebels on October 20 2011, after hiding for weeks in his home town of Sirte.