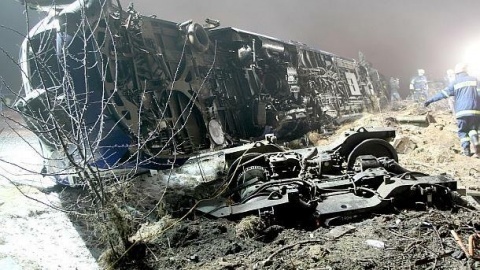 Train No. 2615 of the Bulgarian State Railways BDZ caught on fire in July, 2011 on the route from the capital Sofia to the Black Sea city of Varna. Photo by BGNES

The engine of the express train serving the line between Bulgarian capital Sofia and the Danube city of Vidin had caught fire Tuesday evening.

The train left Vidin at 4 pm and the fire was noticed about 8:30 pm, near the Lakatnik railroad station.

Passengers have been evacuated and there are no reported injuries. The employees at the station have not been exposed to danger either.

Two fire rescue teams have extinguished the blaze, while passengers have been transported to their final destinations on the Bucharest-Sofia train, which arrived several months later. Technical malfunction, caused by a short circuit, is deemed most likely cause. The engine had undergone planned repairs on March 25, 2012.

The case with the train fire is the latest in a string of increasingly serious incidents shaking the country's railroad company.

On August 10, 2011, the express train servicing the line between the Bulgarian capital Sofia and the Black Sea city of Varna caught on fire. No one was been injured, but several people suffered panic attacks.

On July 20, 2011, train No. 2615 of the Bulgarian State Railways BDZ caught on fire on route from the capital Sofia to the Black Sea city of Varna. The train was stopped and the 214 passengers were evacuated intact. However, the fire spread to the first two passenger cars before the fire brigade units arrived at the scene, more than an hour after the fire started, because of the rough terrain.

On June 29, 2011, a local train between Cherven Bryag and Montana in Northwestern Bulgaria had to stop near Vratsa because of a fire on board, without any victims.

On June 10, 2011, the locomotive of a freight train also caught on fire near Simeonovgrad in Southern Bulgaria, with the driver managing to flee intact.

The most severe train incident in Bulgaria since 1992 was also caused by a train fire when 9 persons were burned to death, and 9 others were injured in the night Sofia-Kardam train in February 2008 near Cherven Bryag.

The Bulgarian State Railways, BDZ, is in shambles with outdated cars, engines, and infrastructure, and a staggering debt of BGN 800 M, and has become the subject of an investigation by the European Commission.