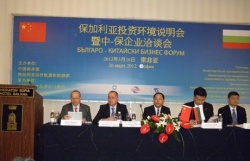 The Bulgarian-Chinese business forum in Sofia. Photo by BCCI

Renewable energy and infrastructure are two of the key sectors where Bulgaria is about to see Chinese investments, according to the participants in a high-profile business forum

Jiang Yaoping is on a three-day state visit to Bulgaria leading a Chinese business delegation. He suggested that Chinese companies should expand their role in Bulgaria in the field of infrastructure construction – all the way from highways to power plants.

According to Marinov, Chinese companies are expected to start producing solar panels and wind power generators in Bulgaria.

Bulgaria's investment advantages that he presented before the Chinese businesspeople included macroeconomic stability, EU membership, the lowest taxes in the EU, incentives for industrial zones and hi-tech parks, and reduction of the administrative burden.

He pointed out the record trade between Bulgaria and the PRC in 2011 – USD 1.346 B, according to data of the National Statistical Institute.

Marinov reminded that Bulgaria enjoys the status of approved tourist destination according to a memorandum between the EU and China's national tourism administration.

By the end of 2011, Chinese investments in Bulgaria have reached a total of USD 70 M, China's Vice Trade Minister said.

Chinese Ambassador to Bulgaria Guo Yezhou told the forum that in 2011 the Chinese investments in the country grew by 320% year-on-year, with new investments in telecommunications, car manufacturing, energy, agriculture.

More that 200 businesspeople took part in the Bulgarian-Chinese business forum in Sofia on Monday.

According to the BCCI Chair Tsvetan Simeonov, the event has helped boost China's business interest in Bulgaria.