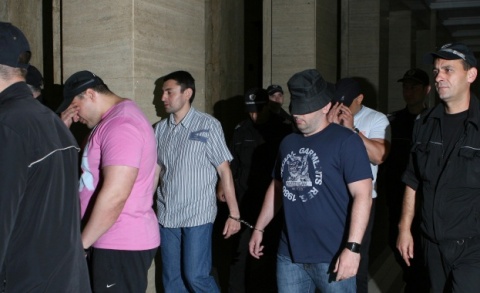 The trial against the so-called Impudent group, accused of 11 abductions, is nearing its end, with sentences expected in April. Photo by BGNES

The Sofia City Court resumed Monday the high-profile organized crime case codenamed The Impudent, after one of the alleged members of the gang with the same name was killed over the weekend.

The magistrates lifted the charges against Kiril Kirilov AKA Shkafa (The Commode). Shkafa, who has a long rap sheet, was shot Saturday into Sunday in front of his apartment building in the Mladost-3 district.

The Prosecutor presented information about Kirilov's death, where the causes were listed as blood loss from gun wounds in the legs. He also submitted to judge, Violeta Magadalincheva, a coroner's report, but the defense lawyers insisted on having the death act, which prompted a short break after which the proceedings resumed.

Kirilov's attorney, Yolinka Staneva, commented before the Court session that her client never planned to become a protected witness and testified in Court, just one day before being murdered that he had nothing to do with the kidnappings. This way she rejected assumptions that Shkafa was murdered over fears he would tell the authorities who is the mastermind behind the abductions that terrorized wealthy Bulgarians for years.

Staneva also said that the investigation has no proof whatsoever about her client's involvement, and confirmed earlier reports that in the last week he had been nervous and scared over constantly being followed by an SUV and different people. Initially, Kirilov taught it was the police, but later realized he had been wrong. He had no idea about the reason and suspected intimidation, not murder.

The lawyer accused the prosecution of not doing their job over releasing the defendant last year on own recognizance instead of keeping him in jail where he would have been safe.