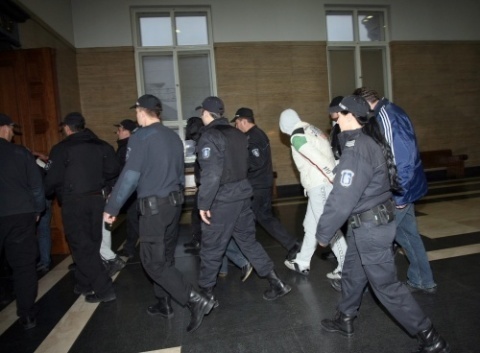 Some of the alleged "Impudent" gang members, are seen here escorted by the police. Photo by BGNES

The murdered defendant in Bulgaria's high-profile Impudent criminal case, Kiril Kirilov AKA Shkafa (The Commode) had expected to be attacked.

His live-in girlfriend told the Bulgarian National Radio, BNR, that Shkafa had been followed in recent days by a black SUV.

The woman says she heard the shots and ran screaming on the balcony. Meanwhile, the victim managed to call her and tell her that he had been shot, asked her to call the police and told her that he loved her. It was reported earlier that the girlfriend was walking home with Kirilov at the time of the attack.

Shkafa, who has a long rap sheet, was shot Saturday into Sunday in front of his apartment building in the Mladost-3 district.

The first bullet apparently hit him in the leg while trying to run away, but attackers caught up with him and finished him off, according to eyewitness reports.

The Chief Secretary of the Interior Ministry, Chief Commissar, Kalin Georgiev, confirmed before the private TV channel bTV that Shkafa had been implicated in several grave crimes, including murder and armed robberies.

In another interview, for TV 7 on Sunday, Prime Minister, Boyko Borisov, stated that people should ask Chief Prosecutor, Boris Velchev, and the Chair of the Supreme Court of Cassations, Lazar Gruev, why such crime figure had been set free.

Among the 9 accused in the trial, Ivaylo Evtimov AKA Yozhi, and Prokopi Prokopiev AKA The Bodybuilder, are charged with racket and with organizing a kidnap gang. Daniel Dimitrov AKA The Relay, Lyubomir Dimitrov AKA The Rower, brothers Radoslav and Mitko Lebeshevski, Pavel Petkov, Kiril Kirilov, and Tsvetozar Slavchev, are all charged as accomplices in a total of 11 high-profile abductions over the last years.