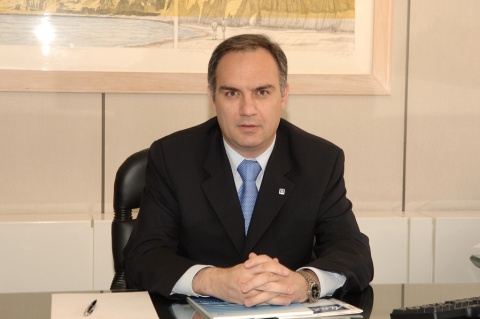 An interview with Evangelos Lytras, Country Manager of Alpha Bank Bulgaria, for the Investors of the Decade Business Survey of Novinite.com (Sofia News Agency) and Novinite.bg.

You have been working in the banking sector in Bulgaria for several years now, making your way to a top position. How do you feel as a Greek expat manager in Bulgaria?

? feel very  comfortable in Bulgaria. It is a promising and challenging country. It helps that Bulgaria is very close to Greece. So I feel like home.

Furthermore, I see a country in a process of development and a government focusing on the economy and business development, which is very positive.

Generally speaking, I feel very lucky regarding the economic situation in Bulgaria and the perspectives for doing business here. I think that there is a potential for growth that has to be elaborated.

How would you describe the situation of Bulgaria's banking system in terms of stability and competitiveness? What are the threats for its stability?

The banking sector in Bulgaria is stable. Despite this unbelievable European financial pressure, I would like to say that the Bulgarian  banking system demonstrated resilience, proving that is one of the most dynamic sectors of the Bulgarian economy.

The data so far indicates that banks have managed to limit the negative effects of bad loans on their profits and their capital base is relatively strong.

How has the merger of Alpha Bank and Eurobank EFG developed?

Following the conclusion of the exchange offer of bonds issued or guaranteed by the Hellenic Republic (Private Sector Involvement – PSI) and its effects on the banking sector, Alpha Bank informed Eurobank EFG that it intends to propose to its forthcoming Board of Directors to convene a General Meeting of its Shareholders to resolve upon there vocation of the decisions of the General Meeting of its Shareholders dated 15 November 2011.

From here on, what your ambitions for the strengthened Alpha Bank in Bulgaria?

The Bank's objective is to strengthen its position mainly in retail banking, by focusing on deposits , credit and debit cards , providing co – branded products and developing our branch network of businesses through which our products are sold.  Another key issue is safeguarding the quality of the Bank's portfolio , which in itself requires close monitoring and effective management

What are Alpha Bank's investments in Bulgaria to date? How do you evaluate their impact and significance?

As you may be aware, we have already been in Bulgaria for 17 years, and we have been steadily financing the county's development.

By expanding the last 3 years our Network Alpha Bank Bulgaria, we managed to achieve an adequate geographical coverage of the Bulgarian market with the Network numbering over 100 Branches as of the end of 2011 and  with around 1000 employees.  Considering the dire economic climate and intense competition Alpha Bank Bulgaria is performing quite well having the right solutions in order to support the citizens in the effort for growth and wealth.

When it comes to stimulating investment, the Bulgarian banking sector has often been criticized for being too conservative and restrained on funding industrial and other types of investment projects. Do you believe this criticism is fair?

It's evident that Bulgaria has been affected by the global crisis from the point of funding industrial and other types of investment projects. From the other side Bulgaria has a lot going on. Low taxation costs. Preferential treatment for investors. Low payroll costs, well-educated people with language skills.

There are entire sectors that are progressing such as the energy sector, the IT sector, the pharmaceutical companies, outsourcing companies. Bulgarian export-oriented companies are doing very well. So I am very optimistic that things will change and there is a potential for growth that has to be elaborated. And all the banks in the country will have the possibility to benefit from it; Alpha Bank will do it for sure.

What trends do you see in bank credits and deposits in Bulgaria? What does these trends indicate about the Bulgarian economy and growth?

The private consumption is relatively low, which is normal for this period and for the consumers' attitude. People want to be sure before they start spending again so they are waiting. But the most important fact is that the deposits are growing, the money exists and the resources will reach consumers when the environment improves. It is a matter of time and not of financial resources availability.

Respectively, what are Alpha Bank's most competitive products?

It is not a matter of  two or three competitive products .The Bank's differential advantage is mainly attributed to its solid corporate image , its  extensive and loyal client base, the efficiency of the its branch network, the quality of course of the products  and its ability to provide services tailored  to  the individual needs of each and every customer .

But if I have to mention some products I should refer to Dynamic Visa , a credit  card that has been created by the joint efforts of the Bank and Carrefour Bulgaria and is the first co-branded credit card, which gives you a reward for each purchase and ties in key brands and merchants in a partner network, where the return can go as high as 24%.

Alpha Progressive Deposit is another flagship product in the market that allows flexibility to deposit and withdraw money without losing income, monthly availability of the accumulated interest and high-yielding tiered interest, reaching up to 8.00% in BGN and 7.00% in EUR.  Also worth a mention is the interactive online platform www.loanadvisor.eu which is unique for Bulgaria and provides easy and understandable consultation and application for all credit products of the Bank.

What would you say are the effects of the Greek debt crisis on Bulgaria? Has Bulgaria suffered or benefited as a result of the situation of its southern neighbor?

The Bulgarian economy is mainly reinforced by export and tourism, which are currently functioning very well. The negative effect on those sectors by the Greek crisis seems limited. At the macroeconomic level the processes are managed in the best possible way, the banking system is also well managed; the central bank monitors and holds the situation under control. Bulgaria needs to keep its momentum within this difficult environment.

Do you think Bulgaria and Greece need to integrate their economies further? What are the ways to stimulate mutual investments, trade, and exchange from you point of view as a banker?

As we all know the two countries have excellent relations, which have been upgraded qualitatively through regular exchanges of high-level political visits. Greece and Bulgaria are partners and allies. So we have to continue and to expand our mutual economic cooperation in sectors like energy, food, constriction, real estate, human capital, IT appliances, tourism.

The world doesn't seem to be making a distinction between the situation of the Greek public sector and state finances and the private sector. What is your forecast on Greece's overcoming of the current crisis – now that the second bailout has been approved and the private debt holders have agreed to a reduction?

I can assure you that no matter which party will lead the country after the elections, the most important thing now is that the Greeks are united as a nation. We know what has happened so far, what has led to a crisis and we don't want it to happen again.

Fortunately or unfortunately in the long history of our country we have had many similar crisis and we managed to overcome them only because of this spirit of unity, our common efforts.

Now, in this case it's really important for the Greek nation to be united again and I am confident that we will become stronger after the crisis, as it has happened in the past. We know which way to go and we will do it.