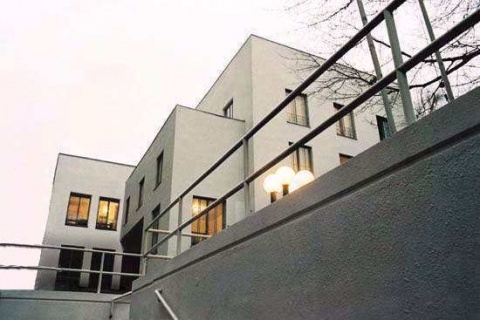 Photos by the Bulgarian Cultural Institute in Vienna, http://www.haus-wittgenstein.at

Few know that Bulgaria was instrumental for saving and breathing new life into an unique monument in Austria’s capital Vienna – a building designed by a great philosopher, the so-called Haus Wittgenstein.

Located at Parkgasse 18 (at the intersection with Kundmanngasse), a stern, white modernist structure is home to the Bulgarian Cultural Institute in Vienna (BCI). The house was built by Ludwig Wittgenstein, perhaps the  most influential philosopher of the twentieth century.

Interesting as the story about how Wittgenstein came to build it for one of his sisters in the 1920s may be, it is troubling to know that after the Second World War the house had fallen not only in disrepair, but also in oblivion.

A number of what appear to be chance events led to the building’s being purchased by the Bulgarian government to house its cultural institute in the Austrian capital.

At this point, BCI-Vienna at Haus Wittgenstein has for 25 years been taking care of the eclectic task of maintaining a haven for Bulgarian culture in Austria, and promoting the life and work of the Austrian philosopher.

In his life, Ludwig Wittgenstein (1889-1951) strayed far from any traditional image of an academic. Over and above his seminal and deep contributions that shook the world of philosophy, he was driven by a passionate existential striving for truth and perfection that could in no way fit the confines of a school.

Born in Vienna to one of the wealthiest families in Europe and raised in different parts of Austria, Wittgenstein went to study at Manchester University, where he received a degree in engineering. Yet he felt that his attraction for deeper problems in mathematics and logic was not something he could leave aside.

He pursued it through personal study, getting in touch with some of Europe’s greatest philosophers-logicians at the time, Gottlob Frege in Germany, the father of modern logic, and Bertrand Russell in Britain, who was instrumental in shaping what came to be known as analytic philosophy. The result was Tractatus Logico-Philosophicus (1921), a short, stern book, modeled on the ideal of “crystalline purity.”

A person of the broadest and most sophisticated upbringing, Wittgenstein did not limit his passion to philosophy and science. The arts, especially music and poetry, were in his blood. This multifaceted and gifted character led to what is perhaps a unique case in the history of philosophy – the designing and construction of a building, one of undisputed aesthetic and functional qualities.

Ludwig was commissioned to the task by his sister Margaret Stonborough-Wittgenstein and executed it between 1926 and 1928 together with architect-friend Paul Engelmann. Ludwig had just returned from a failed attempt at teaching small children in remote Austrian villages and was working as a gardener, and his sister apparently thought the creative endeavor might help him recover from the depression he had slipped in.

Wittgenstein was reportedly inspired by the task, poring over it for more than 2 years until the house was completed. The tyrannical meticulousness with which Wittgenstein controlled the work of the team of designers, builders and producers of exclusively commissioned supplies is notorious.

The final result was famously one that all admired but none found hospitable to live in.

Fast forward to the 1960s – the building has been sold by the Wittgensteins and lapsed into disrepair. It gets vandalized and dilapidated, and is actually scheduled for demolition. Protests led by Austrian architects and joined by people from across the world lead to the Austrian government giving it the status of cultural heritage and thus protecting it.

But no use was found for the house, which continued to crumble. “Then-owner, construction engineer Franz Katlein even resorted to soldering the doors and windows to prevent further break ins,” present Bulgarian Cultural Institute expert Serguey Borissov told Novinite.com (Sofia News Agency).

End of 1974, a of Austrian architects and writers, including Carl Aub?ck and Otto Kappfinger approached then-ambassador of Bulgaria Vladimir Ganovski (an engineer by training), trying to convince him to invest in the house. Their talks have not been documented, says Borissov.

In the end, in 1975 Lyudmila Zhivkova, who was just appointed head of Bulgaria’s Committee on Culture, took a pro-active stance, convincing the Bulgarian state to buy the house, which it did during the same year.

Thus Haus Wittgenstein became part of Bulgaria’s embassy in Austria, temporarily housing the consular service. The main intention was of housing one of the network of Bulgarian cultural institutes abroad that was shaping up at the time.

Of course, reconstruction was needed. The outside of the building was left completely unmodified. The underground level had to undergo a revision, with two walls pulled down to make space for exhibition and concert rooms. “Philosophically speaking, the substance of the building was preserved,” reflects Borissov.

A new building was erected in the court of the house, replacing the old stable with a theater hall of  260 seat capacity. The new hall is mostly underground and did not change the general outlook of the whole complex.

The repairs were ready in 1977 and the Haus Wittgenstein became a cultural institute under the name “Extended cultural service at the embassy of the People’s Republic of Bulgaria to the Austrian Republic,” now simply called “Bulgarian Cultural Institute in Vienna.” “BCI has the double task of spreading Bulgarian culture abroad, but also of bringing together the Bulgarian diaspora and keeping it in track with current life in their homeland,” says Borissov. The institute regularly organizes concerts, theater performances and exhibitions by Bulgarian artists. A recent instance is the Tuesday premiere of the Bulgarian history book Unknown Facts about Renowned Bulgarian Families.

Many of the events are of interest to the local audience, but BCI has the fortune to be located in what is one of the world’s most culturally rich cities, where institutions such as theaters have to fiercely compete for spectators. Among the most popular events organized by the BCI are the regular so-called Jazz Club Wittgenstein featuring Bulgarian musicians, and the yearly Easter and Christmas orthodox icon exhibits, which always draw large number of Austrians.

The institute also houses Austrian and international cultural events, some of them with Bulgarian participation, such as the European Month of Photography, says Borissov. From time to time, the institute organizes side events to Austrian-Bulgarian business meetings, too.

Ludwig Wittgenstein has far from been left behind. “Each and every day we at BCI are engaged in researching and executing projects devoted to Wittgenstein the philosopher and the person, as well as to contemporary philosophy. Each season, the institute has 3-5 such events,” says Borissov.

Just last week, BCI staged to acclaim the monodrama Wittgenstein by Austrian writer Wilhelm Pellert, with Rainhard Hauser giving a brilliant rendition of the philosopher. The play presented the inner tensions and contradictions of a determined man driven by the need to question everything, his own deepest convictions and strongest achievements included.

Notwithstanding its active role and popularity, in a time of massive spending cuts by the Bulgarian government, especially in the field of culture, BCI-Vienna cannot but experience trouble, being a secondary spender of funds from the state budget, says Borissov.

All the same, the institute’s spring program is going full throttle. Scheduled events for May include a visiting tour by Bulgaria’s Ivan Vazov National Theater, a show by painter Yassen Gyuzelev, and a concert of laureates from the Franz Schubert international music contest in Russe.