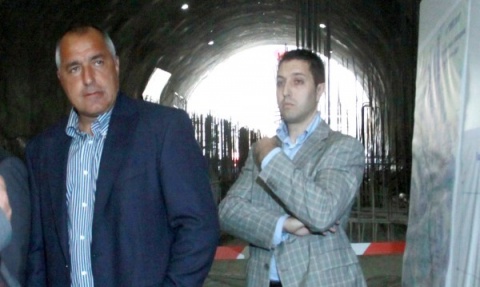 Bulgaria's Prime Minister, Boyko Boriso (front), has reiterated many times that he wants to remain in history as the leader, who build the country's highways. Photo by BGNES

Archeological excavations on the routes of all highways that are currently being built in Bulgaria are on time and on schedule and would not hurdle construction works.

The information had emerged during Prime Minister Boyko Borisov's inspection of the Struma highway in southern Bulgaria, where the PM praised the archeologists for their good work and promised to showcase the archeological finds so that drivers can see them from the highway.

"They find coins, jars, you see this is brilliant work, done quickly and with great quality," said he.

During the inspection Borisov switched for the first time the lighting at the junction Daskalovo, where 155 pillars and 187 lamps have been installed.

The PM informed that the President of the European Commission Jose Manuel Barroso will visit Bulgaria on August 31 for the opening of the new section of Sofia metro.

According to Borisov, Barroso has pledged to personally attend because this is the best project of the European Commission.

At the beginning of January, during a similar inspection, the PM shocked many, when he treated local archaeologists in a surprisingly offensive fashion with respect to an archaeological site found during the construction of the southwestern highway "Struma."