Bulgaria and Austria – On the Artery of Europe, Connected through Past and Present 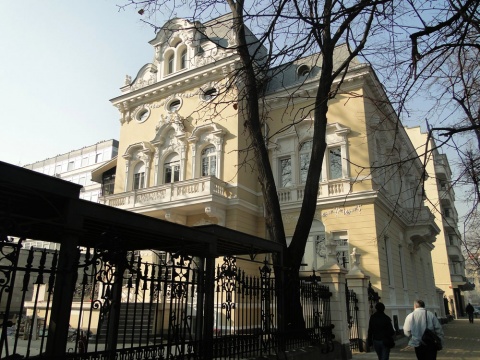 The beatiful Yablanski house in downtown Sofia, built during the first decade of the 20th century by Austrian architect Friedrich Grunager. Photo by amc-aspects.com/bg/architectural-heritage

Bulgaria and Austria have been historically intertwined in their past and present, traditions and culture. The relations between the two countries have been facilitated by geographical proximity and the Danube (Donau) River, the artery of Europe.

As Elias Canetti, Literature Nobel Prize Winner, who was born in Ruse, lived for many years in Vienna, and wrote in German, noted: "When one traveled up the Danube toward Vienna, one would then say that one was going to Europe." Over the course of history, these close relations encompassed not just customs, culture (art, architecture), and education, but can be clearly found in politics and economics.

The enduring Bulgarian-Austrian relations are embedded in the fact that the latter have always contributed to the revitalization and modernization of Bulgaria, all while being of mutual benefit for the two countries.

The capital of Austria-Hungary was the route of European influence in Balkans and in Bulgaria at the time of the Ottoman rule. Bulgarian merchants and colonies established themselves in Vienna even before the Bulgarian Revival, while wealthy and avid for knowledge Bulgarians studied there. Bulgarians keep in their historic memory the time during the Revival when Vienna was the center of printing and publishing of Bulgarian books. A total of 334 books were printed in the Austrian capital, among them the first one in Bulgarian language, in the 1845 – 1878 period. The date July 7th, 1879, turned into the laying stone of the modern Austrian-Bulgarian diplomacy. On this day, Austria became the second among the Great Powers in Europe, after Russia, to appoint a diplomatic representative in the Principality of Bulgaria and designated Count Rudolf von Khevenh?ller-Metsch for Consul General. At the time, Bulgaria was still officially under the sovereignty of the Ottoman Empire. By recognizing and establishing diplomatic relations Austria-Hungary contributed significantly to the quality of the State and to the internal stability in newly-liberated Bulgaria.

After the Liberation, Austro-Hungarian and Russian interests clashed in the Balkans. Though led by own ambition, Austria helped Bulgaria in preventing full Russian dominance, because ever since the Congress of Berlin (1878) Russia had continued to intervene in Bulgarian internal affairs. Bulgaria's royal lineage can also be traced back to the Austria.

The Treaty of Berlin (1878) divided the newly liberated country in two: the autonomous Principality of Bulgaria between the Danube and the Stara Planina range, with its seat at the old Bulgarian capital of Veliko Tarnovo, and an autonomous Ottoman province under the name of Eastern Roumelia, south of Stara Planina. The Principality was to be under nominal Ottoman sovereignty but was to be ruled by a prince elected by a congress of Bulgarian notables and approved by the Powers. The latter insisted that the Prince could not be a Russian, but in a compromise Prince Alexander Battenberg, a nephew of Tsar Alexander II, was chosen.

Bulgaria adopted a democratic constitution, and power soon passed to the Liberal Party led by Stefan Stambolov. Prince Alexander at first opposed Stambolov's policies, but by 1885 he became sufficiently sympathetic to Bulgaria and began supporting them and the Unification with Eastern Rumelia. In 1885, through a coup the Unification turned a fact and was accepted by the Powers. Alexander of Battenberg became too "independent-minded" in Russia's opinion, so it saw to it that he was deposed. In August 1886, after a Russian-masterminded coup, Alexander was forced to abdicate and was exiled to Russia. Amidst many twists, trepidations, diplomatic backstage moves and secret agreements, in July 1887, Bulgaria's National Assembly elected "Austrian candidate," Ferdinand Saxe-Coburg as their new Prince. Born in 1861 in Vienna, Ferdinand was the youngest son of Prince Augustus I of Saxe-Coburg-Gotha. At the time of his election as Prince he had been serving in the Austro-Hungarian army as a lowly junior officer.

His dynastic position was not, however, recognized by the major Powers, but he never missed an opportunity to assert himself over domestic affairs. Finally, in March 1896, Ferdinand's position as Bulgarian ruler received international recognition. He declared Bulgarian independence of the Ottoman Empire on the eve of Austria-Hungary's annexation of Bosnia-Herzegovina, and proclaimed himself Tsar of Bulgaria on 5 October 1908.

After several devastating wars, including World War I, having surrendered to the allies, Ferdinand was forced by the Allies to abdicate in early October 1918 in favor of his son Boris III.

Despite the unsuccessful wars, the arrival of the "Austrian candidate" ended the worst of the country's crisis – the personification of the monarchy helped Bulgaria become a State of its own, more or less independent from external pressure, particularly the Russian one, to get rid of the inferiority complex of being a small country, liberated from outside, a country that cannot lead its own policies.

With Bulgaria's Liberation from Ottoman rule, contacts between the country and Austria-Hungary become more active. At the time, Vienna influenced greatly politics and culture of the newly independent country, and became a model for the emerging Bulgarian elite, a model for cultural prosperity and overall progress.

Perhaps one the biggest Austrian imprints in Bulgaria is the legacy of Austrian architects and their Bulgarian counterparts, who studied in Austria. One just needs to take a short walk in downtown Sofia and see the magnificent buildings designed by them at the end of the 19th and the beginning of the 20th century to feel their eternal presence in Bulgaria's capital.

When Sofia was declared capital of Bulgaria in 1879, and began to grow, the need of a new way to design and build arose, prompting the arrival of prominent architects from Austria-Hungary. The trend intensified after Ferdinand became the new Monarch. This trend turned the underdeveloped Ottoman village into a modern, European city. Invited by the Bulgarian government, which introduced a new law, requiring an academic degree and license for design and construction, these architects settled in the capital long-term and constructed some of its most beautiful buildings, giving the city a "Vienna flare" until today. Names of Austrian architects are connected to such emblematic Baroque and Secession Sofia buildings as the King's (Tsar's) Palace (the former Turkish Konak, redesigned by Viktor Rumpelmayer and Friedrich Grunanger), the building of the Parliament (Konstantin Jovanovic), the building of the National Ivan Vazov Theater (Ferdinand Fellner and Hermann Gottlieb Helmer), the buildings of the Ministry of War – now Defense Ministry, of the Military School, and the Military Club (all by Adolf Vaclav Kolar, but the latter was finished by Grunager), Orlov Most – Eagles Bridge (brothers Vaclav, and Josef Prosek and their cousin Jiri, also founder of the first brewery in Sofia), Lavov Most – Lions Bridge (Vaclav and Josef Prosek). Lions Bridge at the time it was built by the Prosek family. Photo by Stara Sofia

Adolf Vaclav Kolar also worked on the first urban plan of Sofia, on the design of the Central Park known as Borisova Gradina, and of the Vasil Levski monument, whose bust design (sculptor Rudolf von Weyr) and metal ornaments (by the firm of Rudolf Philipp Waagner) were also made in Vienna. Friedrich Grunanger had one of the strongest influences as well. He built some of the most beautiful houses in Sofia – the residence of the Turkish Ambassador, the home of Dimitar Yablanski, (later and until 1993, the building of the Chinese Embassy, with which Grunanger fell so much in love that he built a copy for himself after returning to Salzburg), the Theological Academy and the Theological Seminary, among others. At the end of the 19th century, Bulgarian architects such as Yordan Milanov (work design of the building of Sofia University Kliment Ohridski and design of the Central Post Office in Sofia), Georgi Fingov (a number of houses and public buildings), Nikola Yurukov (houses and public buildings), and Petko Momchilov (Central Bath, Holy Synod –with Milanov, Central Prison and the Sveti Sedmochislenitsi Church – with Milanov, among others), also returned home after studying in Vienna and took part in the building of the European city. The influence of Austrian architects can be further noticed in a number of Bulgarian cities and towns – especially along the Danube River – Ruse, called Little Vienna, Lom, Svishtov, but also in the cities of Plovdiv, Varna, Burgas, Kyustendil. Today, in 21st century Sofia, the Vienna flare is felt through a new tradition – the Vienna Ball, one of top charity events, a connection between Bulgarian and Austrian way of live, and a gathering for the Bulgarian elite. The fundraising ball is organized by the Vienna Club Association and Austria's Embassy in Sofia. Sofia saw the very first Vienna Ball in the dawn of the modern Bulgarian State in 1880, just two years after the country was liberated from the Ottomans. The nowadays Vienna Ball in Sofia took place for the first time in 1996, but has been included in the official calendar of the Vienna Balls and is supported by Vienna municipality since 2001. Several other cities hold the traditional Austrian high-class event around the time of the original - New York, Beijing, Washington, Berlin, Milan, Athens, Moscow and Brussels. The Vienna Ball in Sofia. Photo by Sofia Photo Agency

After the fall of Communism in Bulgaria in 1989, relations with Austria attained new quality and features, became more dynamic and expended significantly. Bulgaria's joining of the EU in 2007 and the common values and issues brought them to another level of cooperation, especially in politics and economics.

Austrian business has leading positions among foreign investors in Bulgaria. Austria was the number one investor until 2009, (nearly EUR 5.5 B were invested in the period 1996 - 2008) while in 2011, Austrian companies have invested more than 50% of the total annual FDI in Bulgaria.

The two countries have new prospects for cooperation in the Danube and Black Sea regions, particularly in the light of the currently under preparation EU strategy for the Danube region. Austria also supports Bulgaria's effort in combating corruption and crime and provides university education for a number of young Bulgarians.