Bulgaria's Largest Mosque to Be Built in Kardzhali 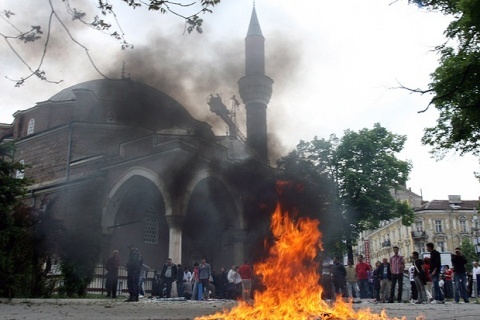 On May 20, 2011, supporters of the nationalist Ataka party set on fire rugs Muslims use to pray in front of the Banya Bashi mosque in downtown Sofia. Photo by Sofia Photo Agency

The construction of a huge mosque is set to be launched in Bulgaria's southern city of Kardzhali, home of a large ethnic Turkish and Muslim community.

The Muslim prayer temple, with two minarets, will be the largest in the country. It will have an area of 1400 square meters and will accommodate 1500 worshipers.

The design of the building has been done in neighboring Turkey and given to Kardzhali as a gift. The construction is expected to begin in April, according to local news sites.

This will be the second mosque in the regional center. Plans for it were launched seven years ago but the project met much controversy and opposition, mainly from land owners, whose plots will be used for the mosque's location.

Local Roma also fear they will be chased away from their shambling dwellings in the area. The far-right, nationalist Ataka party staged a rally against the mosque in 2007.

Regional Mufti, Beyhan Mehmet says that it would be great for the city if the ground breaking ceremony coincides with a major Christian holiday.