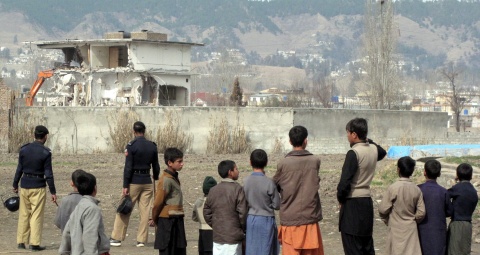 The WP cited documents taken from the slain al-Qaida leader's compound. Bin Laden also ordered the killing of Gen. David Petraeus, then head of international forces in Afghanistan, saying, "he is the man of the hour ... and killing him would alter the war's path" in that country.

According to the Post, bin Laden wanted Pakistani terrorist Ilyas Kashmiri to stage attacks on aircraft carrying Obama and Petraeus. Kashmiri was killed in a US drone attack a month after US Navy SEALs killed bin Laden at his compound in Abbottabad, Pakistan, on May 2, 2011.

The official said the Obama administration was working to declassify and make public "as much of that information as possible," but it would not be completed for months.

According to the Post, in one document bin Laden described the assassination scheme, saying, "Obama is the head of infidelity and killing him automatically will make Biden take over the presidency ... Biden is totally unprepared for that post, which will lead the U.S. into a crisis."

The terrorist leader also urged his top lieutenant, Atiyah Abd al-Rahman, in a 48-page directive to focus "every effort that could be spent on attacks in America," instead of operations within Muslim nations.

He told Atiyah to "ask the brothers in all regions if they have a brother ... who can operate in the U.S. [He should be able to] live there, or it should be easy for him to travel there," the Post said.

The senior US official who spoke with FOX said bin Laden "clearly had bold ambitions to kill as many innocent people as possible" but al-Qaida's capabilities did not match the leader's intent.

"Leading up to and since UBL's (Osama bin Laden's) death we know that AQ's (al-Qaida's) capacity to pull off those types of complex attacks has been greatly diminished, and that bin Laden himself spent much of his time brooding and providing guidance that often fell on deaf ears," he said.

Post columnist David Ignatius, the author of his paper's story, said he had viewed some of the seized documents and described bin Laden as having an unlikely managerial focus for an international terrorist.

Among other things, he discussed the need for "deputy emirs" and "acting emirs" to run regional operations if the local boss was away.