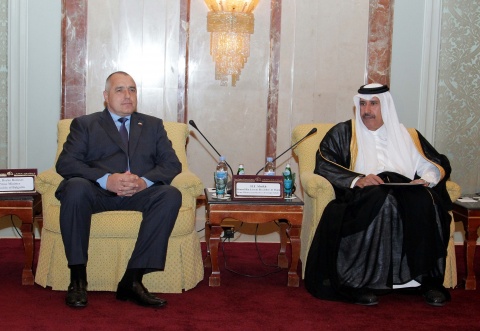 The Prime Minister revealed that a Qatari delegation involving representatives of the three sectors is to visit the Balkan country within a month.

On Wednesday, he stated that Bulgarian companies need to be very active in their attempts to cooperate with Qatar.

"As you know, all our tenders are open and completely transparent. All companies can participate," he said.

During his visit to Qatar, Al-Thani's Bulgarian counterpart stated he was happy that Bulgarian companies had the chance to cooperate with Qatari business.

"As you know, during our last meeting we reached an agreement for Qatar Airways to fly to Sofia and this is a fact now," Borisov pointed out.

"I acquainted the Qatari PM with all 103 companies that are here. I told him in details about what our construction sector does. Bulgarian construction companies have a vast opportunity, especially when it comes to building the Qatari subway. The same goes for the construction of approximately 40 skyscrapers here," he told reporters, adding that there is a considerable Qatari interest in Bulgarian Spa tourism and golf courses.

The Bulgarian-Qatari business forum in Doha was launched Wednesday evening.

Earlier on Wednesday, Qatari investors snubbed the opening of the forum's opening, as only Bulgarians could be seen in the showroom for the forum's launch by Economy and Energy Minister, Traicho Traikov.

Bulgarian PM Borisov is on an official three-day visit to Qatar. In adittion to the businessmen and Traikov, the delegation includes 6 other ministers from the cabinet – of Interior, Tsvetan Tsvetanov, of Foreign Affairs, Nikolay Mladenov, of Regional Development, Lilyana Pavlova, of Defense, Anyu Angelov, of Agriculture, Miroslav Naydenov, of Transport, Ivaylo Moskovski, and the Mayor of Sofia, Yordanka Fandakova. The visit is to end on Thursday.