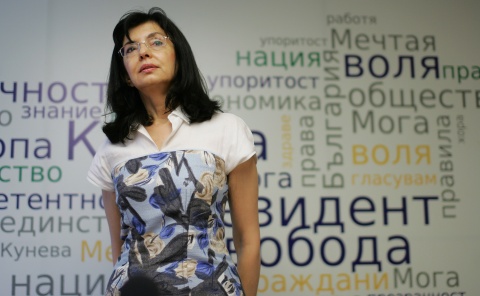 Meglena Kuneva has refuted allegations of a potential coalition partenship with GERB or BSP. Photo by BGNES

Asked to clarify her relations with center-right ruling party GERB, Meglena Kuneva, former EU Commissioner, who announced that she was leaving the National Movement for Stability and Progress (NDSV), has ruled out allegations of a coalition.

"As regards GERB's attitude towards me, there is an odd mix of a little bit of courting and a little bit of bashing," Kuneva said in an interview for private TV station Nova TV on Wednesday, reiterating that the Bulgaria for Citizens movement she founded recently could turn into a political party.

Asked to name a potential coalition partner, Prime Minister Boyko Borisov said last week that "the ones that are closest to us are the Blue Coalition, Yane Yanev (leader of the marginal, conservative Order, Law and Justice, RZS, party, editor's note) and the project of Kuneva, if it does materialize. However, I hope that we shall be able to do enough in the sphere of infrastructure projects so that people are able to appreciate it before the elections and that we have the opportunity to rule by ourselves without coalition partners."

The ex EU Commissioner and presidential candidate at the elections end-October 2011, however, refuted hints about a potential partnership with the ruling party.

"I am firmly against a political cartel. To me, the question of a coalition is not interesting in the least. It is interesting for GERB and I will not enter this scheme, I will not play to their interest or to the interest of the Bulgarian Socialist Party (BSP)," Kuneva stressed.

Regarding her departure from the liberal NDSV party, which backed her nomination for president and her bid for an EU Commissioner, she remarked that "Each party has an interest in its members, especially the ones who have been at the top of voting lists. I made everything I could for NDSV to justify the trust they placed in me. From now on, it is only loyal, to NDSV too, to make clear if I can participate with a front position in voting lists."

Kuneva went on to highlight that some 10 000 people did not base their support for her exclusively on NDSV.

Asked whether she had discussed her decision to leave the ranks of NDSV with former Bulgarian monarch, Simeon Saxe-Coburg, who founded the party, she refused to comment.

Meanwhile, private TV station TV7 came up with a suggestion that the contract for Kuneva's appointment as a member of the BNP Paribas Management Board stipulating a ban on political activities was what was preventing her from setting up a party.