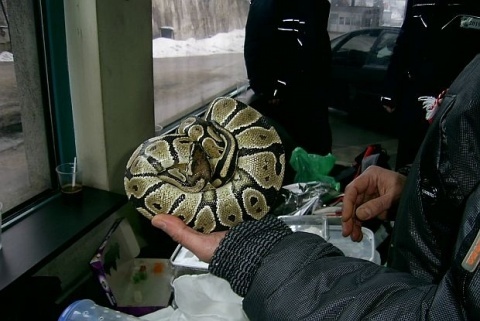 An illegal shipment containing a diverse array of reptiles was detained on a bus at the Kalotina border crossing point. Photo by BGNES

After a Bulgarian was busted trying to smuggle monitor lizards, tortoises, snakes, caimans, pythons, chameleons and other peculiar animals into the country with the use of suitcases, the creatures have been quarantined in the Sofia zoo.

One or two of the animals have reportedly undergone medical treatment. Most of them are still babies, so they have been placed under ultraviolet light in order to prevent rickets.

The Sofia zoo has sought assistance from foreign experts on how to deal with the exotic creatures. Several zoos abroad have been contacted and asked for advice, Sofia zoo director Ivan Ivanov has told the Bulgarian National Radio.

Ten of the species captured in Monday's bizarre smuggling operation have never before inhabited the zoo.

Six monitor lizards, three caimans, three pythons, 15 chameleons, 49 tortoises, an extremely poisonous scorpion, poisonous frogs, six crabs, 10 snails and a number of cockroaches and worms were found during an inspection of a bus at the Kalotina border crossing point with Serbia at 6.45 a.m. on Monday. The exotic collection included 127 live reptiles.

The vehicle was traveling from the Czech Republic.