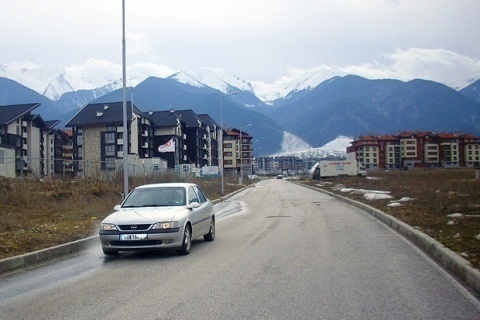 Property prices in Bulgaria's biggest ski resort of Bansko are in freefall and with the exit of British and Irish buyers, Russian investors now dominate the market, putting to good use their bargaining skills, a survey shows.

Many Bulgarian and British investors, who have been lured into Bansko ski properties with no exit in sight, are seeing their dream come to a sorry end and scramble to attract the attention of Russian buyers.

Even though over the last two years Bansko has not seen the launch of new holiday complexes, there is a huge number of properties up for sale and prices have already fallen by 50%.

Statistics show hotels with over 7000 beds have opened since 2007. About 80% of them are in apartment complexes. At the same time, the number of transactions in the region has decreased significantly - from 4000 in 2009 to 1800 last year. Of these, 1300 were purchases on the secondary market, a survey of investment company GreenLife shows.

At the end of last year Bansko was named the world's best value ski resort for Britons.

While in 2010 it ranked second, preceded by Romania's Poiana Brasov, now Bansko has emerged as the most attractive winter resort for Britons on a budget since prices have fallen by 5% in comparison with 2010.

The total cost for ski equipment, lift passes, ski tuition, drinks and an evening meal for two came in at GDP 263 which was still GBP 100 cheaper than at the runner-up resort of Arinsal in Andorra, whose prices have also fallen by 5%, according to the Ski Resort Report 2011, carried out by Post Office Travel Money in association with Crystal Ski.

The little town bordering Pirin National Park, about 160 kilometers south of Bulgaria's capital Sofia, offers a stark but nice contrast between the cobbled streets and churches of the old town and hundreds of millions of euros poured into hotels, ski runs and bright blue gondola bubbles in its modern part.

Supervising all this is the roughly 2,800-meter Todorka peak.

The formerly off-the-beaten-path destination has recently gone mainstream, but it is very rarely that tourists see the vistas doom-sayers warn against - construction cranes and gaudy mutrobaroque hotels, favored by the nouveau riche and organized crime mobsters, known as mutri, with which they try to prove their wealth.

Tourists need to spend no more than 25 euros a night in those hotels, which exemplify Bansko's ambitions best – quite chic, but without the ridiculous attempts to be consmopolitan often found at Bulgarian resorts.

The old town, where the prices are lower even than the capital Sofia, is a collection of ski and souvenir shops with cozy, dimly lit taverns and restaurants. It is not unusual to see an entire lamb or pig roasting on a spit in front of one of the eateries.

The alternatives are the pubs, frequented by British, Irish and Greek tourists, who, together with the Russians, have until recently been the driving force of Bansko's prosperity.

British expats, holiday homeowners and pensioners, living in Bulgaria and Bansko in particular, are selling up and come home in droves – or at least sending foreign money back to the UK.

Property investors who bought in the boom years, before the credit crunch in 2008 have had their fingers burnt. Even though Bulgaria is outside the eurozone, most property transactions are in euros.

Meanwhile investors from Russia, Ukraine and Azerbaijan are showing a growing interest in real estates located in Bansko, Sofia and along the Black Sea coast.

They are looking for already built properties or new construction and refrain from greenfield purchases.