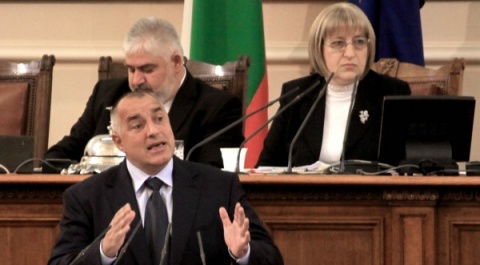 Prime Minister, Boyko Borisov, told the Parliament his cabinet was able to create fiscal stability by paying most of the debt left by the previous Three-Way Coalition cabinet and still keeping taxes low. Photo by BGNES

The Value Added Tax, VAT, in Bulgaria might be lowered by end of the term of the current government of the ruling, center-right Citizens for European Development of Bulgaria party, GERB.

The statement was made in the Parliament Friday by Prime Minister, Boyko Borisov, who spoke during the so-called parliamentary control when Members of the Parliament pose questions to ministers from the cabinet.

When asked by Anton Kutev, an MP from the opposition, left-wing Bulgarian Socialist Party, BSP, how the government is encouraging local economy, the PM explained that it does so by directing the business to sectors that create higher VAT, increasing exports, stimulating internal demand and effective absorption of EU funds.

Borisov stressed his government was able to create fiscal stability by paying most of the debt left by the previous Three-Way Coalition cabinet and still keeping taxes low.

Kutev replied that it was precisely the previous cabinet that increased retirement pensions while now about 10 retirees are dying every day because they cannot pay for their medications.

The statement prompted Borisov's Deputy, Finance Minister, Simeon Djankov, to take the stand and say that BGN 4 B from the fiscal reserve were used precisely for covering debts of the previous government and this is the reason why this reserve fell so low (BGN 4 B).

Meanwhile, a heated argument flared between the opposition and the Speaker of the Parliament, Tsetska Tsacheva, as to why she had allowed Djankov to speak on behalf of Borisov, and almost brought to a halt the parliamentary session.