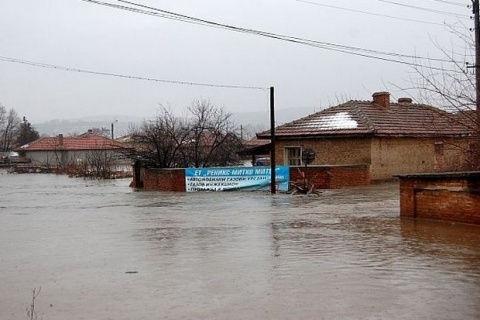 The southern Bulgarian village of Biser was hit by a flood wave on February 06. Photo by dariknews.bg

15 families, whose homes were destroyed by the flood in the southern Bulgarian village of Biser in early February, will sign Friday documents for the construction of their new homes, according to Irena Uzunova, District Governor of Haskovo.

On Monday, each family will be able to discuss their individual preferences for their future home with architects and the documents required for the issuance of a visa for construction will immediately be filed to the Harmanli Municipality.

Construction works in the flood-hit village are expected to start in 10 days.

A total of 50 houses which were devastated by flood waters should be replaced with new ones by fall 2012.

The families who lost their homes in the flood were presented with the different options for family houses some 10 days ago and are free to choose a new home of their preference.

Another 107 houses which were heavily damaged by the high waters in Biser will be repaired with the support of six municipalities, including Plovdiv, Burgas, Ruse, Veliko Tarnovo, Yambol and Pernik.

On February 06, the village of Biser, Harmanli municipality, was hit by massive flooding after the wall of the Ivanovo dam collapsed.

The accident killed 10 and the government declared February 08 a day of mourning over the tragic deaths.