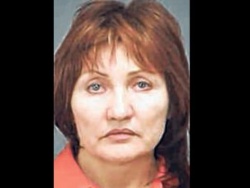 Prosecutors are pressing for death penalty against Natalia Wilson. Photo by Inside NoVa

Russian woman Natalia Wilson, who killed Bulgarian Slavka Naydenova in Dale City, Virginia, has confessed she committed the murder out of jealousy.

The confession was made two years ago after a lengthy 20-hour interrogation, but now has been revealed by Virginia news website Inside NoVa.

Natalia Wilson claims that she was in an emotionally affected condition when she killed 41-year-old Naydenova, the sister of Bulgarian tycoon Iliya Pavlov who was shot dead in 2003, and her 8-year-old son.

In the interview, Wilson told police she went to Naydenova's house and asked to use the bathroom, without telling her who she was. A short time later, Wilson told Naydenova that she was her ex-husband's current wife.

"I want to ask you a lot of questions," Wilson said she told Naydenova. "Why is my husband here so often?"

Wilson told police that Naydenova got angry and told her to leave. She said Naydenova started to scream and ran at her with a knife and Wilson grabbed her hands.

"She was saying, 'I will kill you,'" Wilson said. "I was scared, I was terrified and I was feeling hatred."

Wilson told police she did not remember exactly what happened, but, after a struggle, Naydenova and Paul, who ran into the room when his mother yelled for him, were dead of multiple stab wounds.

In court documents, police and prosecutors say that Wilson killed Naydenova out of jealousy and killed Paul because he ran into the room.

Defense attorneys argue that Wilson only confessed to the crimes because of stress of the police interrogation and say that police did not fully investigate other suspects.

Now a judge will decide whether or not that confession will be allowed into evidence at Wilson's capital murder trial.

Prosecutors are pressing for death penalty.

Natalia Wilson is the second wife of Lester Wilson, an American national whom Slavka Naydenova divorced.

Natalia Wilson, formerly named Natalia Leshtenko, was born in Stavropol, and before leaving for the US used to live in the Russian Black Sea city of Novorossiysk. Her daughter (born 1985) also lives with her in America.