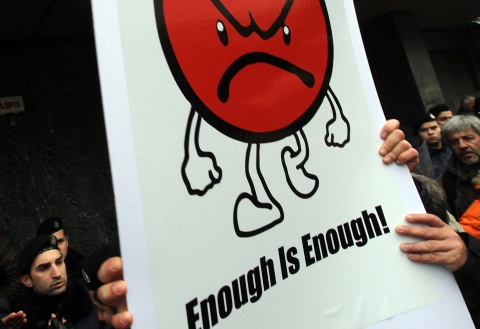 Demonstrators hold banners during a rally organised by public and private sector trade unions in front of the European Commission offices in Athens, Greece, 29 February 2012. EPA/BGNES

The latest deal to cut Greece's debt has not yet constituted a default, ISDA, an official trading body has ruled.

The International Swaps and Derivatives Association (ISDA) said Thursday that new Greek legislation forcing all bondholders to accept losses and steps by the European Central Bank to avoid losses on its Greek bonds, did not equate to a "credit event."

It means payments of credit default swaps (CDS) - insurance mechanisms against default - totalling about EUR 3.2 B have not been triggered.

ISDA, which oversees complex forms of credit-related trading, was asked by an anonymous market participant to determine if a Greek "sovereign credit event" had occurred earlier in the week.

A second question relating to Greece's solvency was asked on Thursday morning, stepping up the pressure on ISDA's EMEA Determinations committee which made the ruling.

In response to both questions, the 15 members voted unanimously that a "restructuring credit event" had not happened.

But London-based ISDA also noted that the situation in Greece was still evolving and further questions relating to the debt-laden nation could be submitted.

The body said that "a credit event could occur at a later date as further facts come to light."

It was, S&P said, a reaction to the bond swap plan agreed with private creditors by Athens to reduce its debt burden which will see investors incur losses of up to 75% on existing Greek bonds.

The ECB also moved to temporarily suspend the eligibility of Greek sovereign bonds as collateral for bank loans.

It will start accepting Greek bonds again by mid-March when measures to insure the ECB against losses come into effect.