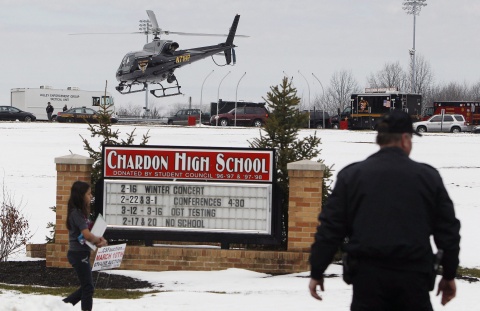 A gunman has wounded four students, and killed one, at a suburban Cleveland high school Monday morning before apparently being chased out of the building by a teacher, police said at a news conference.

The Chardon High School shooting suspect - believed to be a student, according to a school official - was in custody after turning himself in to bystanders, police said, as cited by CNN.

Two students injured in the shooting, one boy and one girl, were taken to Hillcrest Hospital, spokeswoman Heather Phillips said. One was in serious condition, the other in stable condition, she said.

Three students were taken by helicopter to MetroHealth Medical Center, hospital representative Shannon Mortland said in a statement. Mortland did not provide details on their conditions. It was unclear where the fatally wounded student had been taken.

A student at Chardon High, Evan Erasmus, told CNN affiliate WEWS that the victims may have been students at a school in nearby Auburn, Ohio, waiting for a bus to take them there.

He said the suspect may have posted a threatening message on the social networking service Twitter before the shooting.

"I think he said that he was going to bring a gun to school, and I think that everyone just blew it off like he was joking," Erasmus said.

Police recovered a handgun and gave it to the federal Bureau of Alcohol, Tobacco, Firearms and Explosives for examination, the agency said.

A law enforcement source said the Geauga County sheriff's office and federal agents were executing search warrants in the case, but the official did not provide locations.

Investigators took over the school Monday morning and were collecting evidence after students had been evacuated to nearby Maple Elementary School, said Lt. John Hiscox of the sheriff's office.

He declined to say how authorities learned of the shooting. School administrators called off school for the day and assured parents that students were safe.

Still, parents eager to retrieve their children hurried to school buildings, forming long lines as school officials and police checked identification before releasing students. SWAT team members stood guard outside the school, allowing only a few parents inside at a time, enhancing what was a surreal scene for many.

CNN reminds that there is a long history of deadly violence on school campuses in the USA, ranging from incidents in which students stab each other or shoot staff members to mass murders like the ones at Virginia Tech and Columbine High School.

In April 1999, two teenagers, Eric Harris and Dylan Klebold, killed 12 students and a teacher before they killed themselves in the library at Columbine High School in Littleton, Colorado.

Gunman Seung-Hui Cho unleashed one of the deadliest campus attacks in American history at Virginia Tech in April 2007, killing 32 students and staff members. Two handguns were found near his body after the 23-year-old senior finally ended his rampage by killing himself.

Not all school killings are carried out by students. A 32-year-old man, Charles Roberts IV, took 11 girls hostage at a small Amish school in Pennsylvania in October 2006 and killed five of them. The other six were wounded before Roberts killed himself.