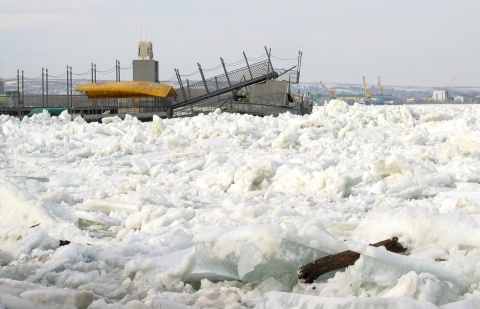 The re-started ice float has damaged badly the facilities of Port Silistra, one of the major Bulgarian Danube ports. Photo by BGNES

The reemerging ice float on the Danube River has damaged severely one of Bulgaria's major river port, Silistra.

On February 11, 2012, the Bulgarian Agency for Exploration and Maintenance of the Danube River announced that the Danube is 100% frozen from kilometer 386 to kilometer 375, which is near Bulgaria's Silistra, which was first time the river froze in the Bulgarian section in 20 years.

As the ice began to melt, however, on Monday, February 27, the level of the Danube rose by two meter at Silistra, and the resulting ice float shattered the Port Silistra facilities badly damaging the pontoons and rails, the poles, trees, and banisters along the bank, a correspondent of the BGNES agency reported.

The ice float even swept an anchored cruise vessel and a patrol boat of the Bulgarian Border Police and dragged away down the river. Luckily, none of the crew members or the port personnel have been injured.

A total of nine vessels that had been blockaded for days by the ice near the Romanian bank across from Silistra have also been badly affected by the ice float.

The freezing of the Danube River has been attributed both to the low temperatures and to its record low level since the summer of 2011; the river has thus frozen for the first time in 20 years.