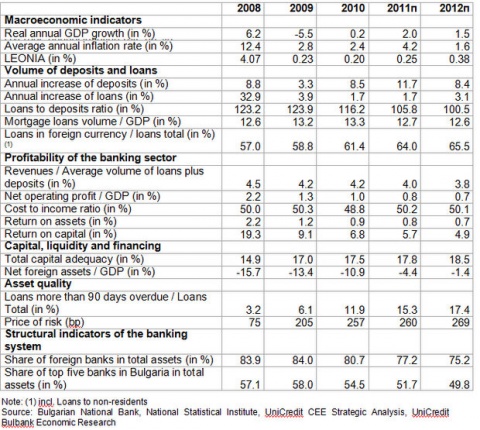 CEE Banking Study 2012, focus on Bulgaria - provided by UniCredit Bulbank for the Investors of the Decade Business Survey of Novinite.com (Sofia News Agency) and Novinite.bg

The Bulgarian economy manages well the challenges, resulting from the crisis with the government debt of the Eurozone countries. The fast process of adaptation to the new conditions puts an end to much of the imbalances at the outset of the global financial and economic crisis at the end of 2008. The current account at 2011 year-end is expected to have a positive balance of nearly 3% from the GDP, while base inflation remained below 1% yoy throughout 2011.

The GDP recovery is under way, but slowly, and at the end of 2011 the GDP is expected to have reached around 4% below its end-2008 level. At the core of the poor domestic demand is the slow recovery of the labour market and the real estate market, in combination with the continuing pressure for reduction of the financial indebtedness of the corporate sector.

In the context of the Currency Board Arrangement, the economic policy remains focused on maintaining a reasonable counter-cyclical fiscal policy and speeding up of the growth supportive structural measures. We think, however, that this will hardly be sufficient to make up for the negative effects of the delays in the Eurozone and we expect the GDP growth to slow down to 1.5% this year compared to 2% last year.

Condition of the banking sector

The pronounced increase of the savings rate and the improved savings incentives (because the actual interests on time deposits remain positive) have a key role in explaining the double digit increase in deposits attracted from corporates and households last year. Initially the process was fully moved by the household deposits, but in the second half of 2011 corporate deposits also started to rise at a two-digit pace because the escalation of the debt crisis in the Eurozone forced companies to cut down on investments and start piling liquidity reserves in order to better meet their greater need for external financing. The weak competitive pressure from alternative forms of saving and the improving fiscal position also had a positive contribution to the remarkable growth of bank deposits last year.

The improvement of the outlook for the Bulgarian economy which we expect in the second half of 2012, will lead to a gradual decline in the savings rate and slowdown of the growth of deposits attracted from the households. Considering the scale of the remaining further reduction of the financial indebtedness of the corporate sector, the deposits attracted from companies are also expected to grow at a slower pace in 2012.

The declined demand together with some tightening of the standards for the new loans, limited the increase of credit for the households and the corporations to around 2% yoy last year. Additionally, some banks decided to reduce part of their non-core assets by selling out or by not renewing exposures after such have matured, which has additionally restricted the increase of credit for the real economy. The big picture is that after reaching the bottom in 2010 the growth of credit is stabilizing even if at a very low level.

As decreasing of the financial indebtedness draws to a close in more and more sectors of the economy, we expect a gradual acceleration of the corporate credit growth in the future.

Since deposits increased faster than loans, at the end of 2011 banks were able to reduce their dependence on external financing close to the levels seen in early 2006, thus considerably reducing their vulnerability in case the credit in the Eurozone dries out if the debt crisis deteriorates. However, this summed up picture does not reveal the considerable differences between the various banks.

Thus, while most banks have on the whole balanced external positions, where net external assets stand at or are close to zero or positive, there is still a limited number of market participants, which still have a long way to go before reducing their dependence on external financing to more stable levels.

The unfavourable tendency of asset quality impairment is not completed yet. Our main scenario envisages that loans more than 90 days overdue will peak at 17.5% - 19% from total loans in end-2012 or early 2013. The asset quality remains vulnerable due to the slow and unpredictable enforcement process and the non-negligible concentration of corporate loans in the field of real estate and construction, which sectors are among the worse affected ones by the drop in the real economy.

In 2012, the credit quality will be put to an additional test due to the delayed growth in the Eurozone, which remains the most significant trade partner of the Bulgarian companies. The other sources of vulnerability include the still dropping prices of homes and the continuing process of reduction of the corporate sector financial indebtedness, especially as regards financing attracted from abroad.

On the other hand, there are several stabilizing factors. Even if slowly, the real income increases, while at the same time households and especially the public sector continue to maintain a healthy consolidated balance. Most banks continue to maintain sufficiently high loss absorption capacity. The relative share of the loans in currencies other than BGN and EUR is less than 4% of total credit.

The capital adequacy, measured through the ratio of Tier 1 and total capital to risk-weighted assets was 15.6% and 17.8% respectively as of September 2011. The excess reserves (reserves exceeding those necessary to ensure 100% coverage of the money supply with foreign currency), which BNB can use in case it has to act as creditor or a last instance source of liquidity, exceed BGN 4 billion at the end of 2011. Nevertheless, we cannot fully exclude the scenario of certain less solid market players’ needing capital support, because while on a consolidated level the banks in Bulgaria are better capitalized than many other CEE countries there is no clarity how exactly this capital is distributed at individual bank level.

The banking profits remained weak, and the return on capital is expected to remain below the price of capital in 2011. The pre-tax profit for the whole banking sector is expected to be slightly above BGN 600 mio at the end of 2011. This largely reflects one-off factors and mostly the higher costs from impairment and provisions under overdue loans. The higher external financing price especially during the second half of the year, even if to a lesser extent, was also a profitability limiting factor, while administrative costs remained under control and increased at a pace close to the inflation rate.

We expect the profitability in 2012 and 2013 to stay at the levels of the preceding year because the operating environment for banks will continue to face substantial challenges. The prospects for improvement are related to 2014 and especially 2015, when we expect the return on capital before taxes to reach 12.5% per year.