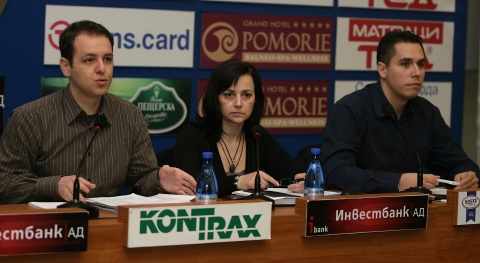 A press conference of the "Civil Initiative for a Ban on Shale Gas Exploration and Production through Hydraulic Fracturing" on January 24, 2012. Photo by BGNES

Representatives of the "Civil Initiative for a Ban on Shale Gas Exploration and Production through Hydraulic Fracturing" will submit to Parliament a petition for legal amendments backed by over 51 000 citizens, the Bulgarian Telegraph Agency (BTA) reported.

"We insist that the moratorium on the technology for extracting natural gas from underground shale deposits should be regulated by a law rather than a decision of Parliament of the sort that was adopted on January 18, 2012. We also demand a statutory ban on underground carbon dioxide storage," Borislav Sandov, a representative of the civil organization, told news portal investor.bg on Thursday.

Environmental activists demanded as early as November 2011 that the moratorium on shale gas be introduced by a law.

"We are supposed to submit our legal proposals to Parliaments within three months. The deadline expires on February 26, Sunday, which is why we shall file the petition on Friday, February 24," Sandov added.

On January 18, the Bulgarian Parliament imposed an indefinite ban on shale gas exploration and production through hydraulic fracturing or other similar technology.

Bulgaria became the second EU Member State after France to ban the controversial technology. One day before that, the center-right government cancelled a shale gas exploration permit awarded to U.S. Chevron.

Traicho Traikov, Minister of Energy, Economy and Tourism, explained that the U.S. company would still be allowed to conduct natural gas exploration activities through the conventional technology.

Little after the shale gas ban was imposed, rumors started circulating that the authorities may backtrack on their vows given against the backdrop of widespread protests.