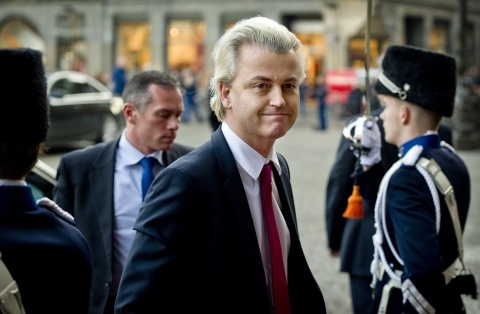 Geert Wilders (C), leader of Party for Freedom, arrives at the traditional New Years reception of Dutch Queen Beatrix for Dutch guests in the Palace at the Dam Square in Amsterdam, The Netherlands, 17 January 2012 EPA/BGNES

The xenophobic website that stirred a scandal across Europe is a responsibility of the far-right Freedom Party, Dutch Foreign Minister Uri Rosenthal has told Ambassadors and representatives from Eastern European countries.

Rosenthal has told the diplomats that the Dutch government has a positive attitude towards the contribution of Central and Eastern European workers to the country's economy.

According to the speaker of Poland's Embassy in the Netherlands, Rosenthal and the diplomats have had a very good and constructive discussion.

However, Bulgaria has expressed its dissatisfaction with the Dutch position. The Balkan country has demanded that Dutch PM Mark Rutte officially distance himself from the motives behind the website in question.

The notorious website created by the far-right Freedom Party (PVV) of Geert Wilders triggered a wave of reactions on behalf of  Central and Eastern Europeans. European Commissioner for Justice, Fundamental Rights and Citizenship Viviane Reding condemned the website, describing it as a call for intolerance.

The Ambassadors of 10 Central and Eastern European countries, Bulgaria included, sent an open letter to political party leaders in the Netherlands protesting against a website.

The European Parliament has decided to hold a debate at its next plenary session on the anti-European and anti-immigrant website created by the Dutch PVV Party of Geert Wilders.