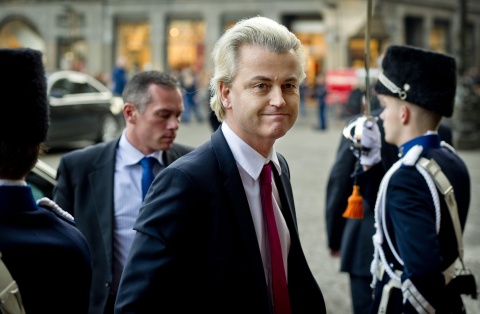 Geert Wilders (C), leader of Party for Freedom, arrives at the traditional New Years reception of Dutch Queen Beatrix for Dutch guests in the Palace at the Dam Square in Amsterdam, The Netherlands, 17 January 2012 EPA/BGNES

Dutch anti-discrimination officers have received more than 3000 complaints against the recently created xenophobic website that attacks Central and Eastern Europeans.

According to Geert-Jan Amcome, head of the Dutch anti-discrimination office, LBA, complaints have come from Dutch nationals as well as from Central and Eastern Europeans living in the Netherlands.

Most of the complaints have called for the closure of the site, Ankome has revealed, as cited by dnevnik.bg.

However, he has admitted that LBA would not be taking the case to the Dutch courts, since it has little chance of success.

The notorious website created by the far-right Freedom Party (PVV) of Geert Wilders triggered a wave of reactions on behalf of  Central and Eastern Europeans. European Commissioner for Justice, Fundamental Rights and Citizenship Viviane Reding condemned the website, describing it as a call for intolerance.

The Ambassadors of 10 Central and Eastern European countries, Bulgaria included, sent an open letter to political party leaders in the Netherlands protesting against a website.

On Thursday, all Bulgarian MEPs expressed their outrage with the Dutch website. In a statement, the MEPs accused PVV of trying to discriminate against European citizens.

Also on Thursday, it was made clear that the European Parliament has decided to hold a debate at its next plenary session on the anti-European and anti-immigrant website created by the Dutch PVV Party of Geert Wilders.