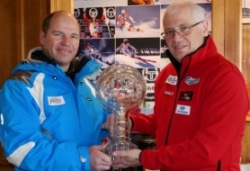 Bulgaria's Agency for State Financial Inspection has filed a signal at the Prosecutor's Office against Tseko Minev, in his capacity of Bulgarian Ski Federation president.

According to a recent check by the Financial Inspectorate, under Minev's chairmanship, the Federation has awarded a number of contracts to private companies without the due public procurement procedure.

What is more, the companies contracted by the Bulgarian Ski Federation reportedly appear to be ones Minev owns or has an interest in.

According to the Agency for State Financial Inspection, during 2006-10 the Ski Federation has breached procurement rules 7 times, awarding contracts for BGN 0.86 M.

The Inspectorate has issued fines on the 7 breaches amounting to BGN 10,500, which however have not been paid by Minev.

"The Inspectorate has made the facts known to the Ministry of Sport, being the financing organ to the Bulgarian Ski Federation, as well as the Public Procurement Agency and the Sofia Prosecutor's Office," reads a statement by teh Financial Agency.

Tseko Minev is known as owning a number ski companies, such as Vitosha Ski, and as being the de facto owner of First Investment Bank.

End of 2011, Vitosha Ski was implicated in a scandal after it refused to run ski facilities in the Vitosha Mountain nearby Sofia, on grounds of alleged obstructions by the state.

State organs reacted by rushing through cabinet and parliament legislation amendments making it easier for companies to build in protected areas, which provoked the ire of enviornmentalists and skiers alike.