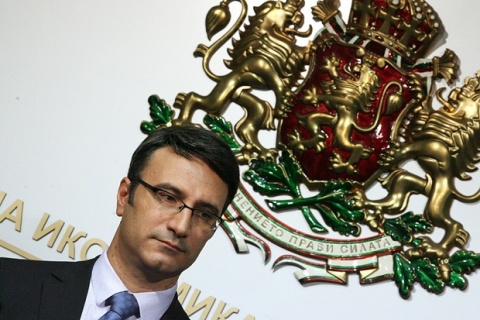 Traikov has thus joined the chorus criticizing Kuneva for her role in negotiating the EU involvement in ACTA, the vastly controversial anti-piracy agreement (Anti-counterfeiting Trade Agreement).

"She was the EU Commissioner in charge of consumer protection in the time when all EU member states gave the European Commission a mandate to negotiate on their behalf," Bulgaria's Economy Minister stated.

"The EC is a collective body, and Mrs. Kuneva was part of it as an EU Commissioner, i.e. she was part of the negotiating team, and even had a consumer protection portfolio. It is hard for me to imagine a more suitable position, from which position in favor of consumer protection can be defended," Traikov declared in Bulgaria's Stara Zagora on Monday, as cited by BGNES.

To a certain extent, he has reiterated the conclusions of a report by the Institute for Modern Policy, a Sofia-based NGO, for Kuneva's role in involvement Bulgaria into ACTA, the major difference being that the Institute also puts the blame on Bulgaria's current ruling party, center-right GERB.

Former EU Commissioner on consumer protection Meglena Kuneva herself has firmly denied recent reports that she had participated in ACTA negotiations and had involved Bulgaria in it.

Kuneva, who also chairs her recently launched civic movement, dubbed "Bulgaria for Citizens," wrote the following on her Facebook page:

"I am restoring the Three-Way Coalition; stealing Slavi Binev's party and signing ACTA – all this according to people with whom I was forced to work during my presidential campaign. I expect to read tomorrow that I eat children for breakfast."

According to the ex Commissioner, who also ran for President in October 2011, and ended third in the race, the energy of her civic movement had scared the future coalition partners between the ruling, center-right Citizens for European Development of Bulgaria party, GERB, and the left-wing, opposition Bulgarian Socialist Party, BSP, and they have re-launched the "slander factory."

Kuneva declares her outrage from the new lies about her, aiming at diverting the responsibility for the signing of ACTA from the current Bulgarian cabinet and rejects accusations that as EU Commissioner and later she took part in ACTA negotiations.

She voices conviction that the Internet is a free space and must remain such and any activity that could lead to violations of basic human rights must be carefully considered in order to not allow such violations.

"The Bulgarian cabinet not only did not show any interest in ACTA, but did not even find it necessary to discuss the subject. It must be clear that the possible withdrawal of Bulgaria will be due only to the clearly stated position of local internet users and their negative reactions. The protests in Bulgaria are against internet spying, violation of personal rights, and the lack of dialogue with the government, which makes important decisions without an open public debate," Kuneva wrote, stressing that as Commissioner she always protected consumers' rights and had managed to include the notion "internet consumer" in the total Strategy of Consumers in EU.

The agreement was sealed by Bulgarian Ambassador to Japan Lyubomir Todorov, based on a decision by the Bulgarian cabinet taken hastily on January 11.

22 out of the 27 EU member states have signed ACTA, along with countries such as the USA, Japan, Canada, Australia, South Korea and Switzerland. From among the EU Member States, Germany, Cyprus, Estonia, Slovakia and the Netherlands have postponed their signing.