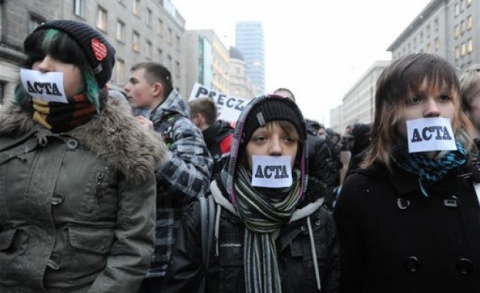 Mass protest rallies against the controversial international Anti-counterfeiting Trade Agreement, ACTA, were organized in 15-16 Bulgarian cities and in 150 cities across Europe Saturday. Photo by BGNES

Bulgaria's Prime Minister, Boyko Borisov, is most likely to withdraw the country's signature under the controversial international ACTA agreement.

The leader of the marginal conservative Law, Order and Justice (RZS) party, ?ane Yanev, held a phone conversation with Borisov in which the two have discussed ACTA and the serious public outcry against it.

On Sunday, RZS declared it will not support the potential ratification of the trade agreement in the country's Parliament.

"After listening to our motives and voicing his own, the PM and I reached the conclusion that the current cabinet must not be held responsible in the future for the unprecedentedly shady negotiations on ACTA, led by people, who today present themselves before society as some new and pure faces in politics," Yanev says. He reminded that Bulgaria's former EU Commissioner, Meglena Kuneva, had supported ACTA while on the post and failed to stand for consumers, despite the fact this was precisely her sector in EC.

The conservative leader further points out he hoped that Borisov will personally initiate Bulgaria's withdrawal from ACTA as soon as the regularly scheduled for Wednesday meeting of the Council of Ministers and the cabinet will vote "yes" on it.

"If it happens, we will deeply satisfied that the government had listened to the opinion of civic society and the RZS party," Yanev concluded.

Meanwhile, on her Facebook page, Kuneva firmly denied allegations she had supported ACTA and was a key figure in its signing.

Supporters of ACTA argue that the measures are necessary to clamp down on growing levels of piracy.