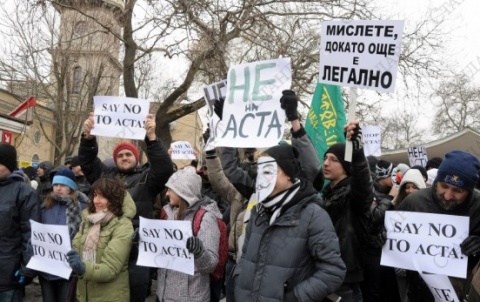 Most of the demonstrators are young people wearing the mask of Guy Fawkes, symbol of the global protest against ACTA. They are jumping and holding numerous signs such as "I Am Not a Terrorist!", "No to ACTA!", "Stop ACTA or We will!", "Sign ACTA – Lose the Elections!", "Basta to ACTA!" and others.

The entire route of the march – from the National Palace of Culture through downtown Sofia to the square in front of the Parliament had been guarded by heavy police presence.

Similar rallies are being organized in another 15-16 Bulgarian cities and in 150 cities across Europe Saturday.

The Bulgarian Facebook "No to ACTA" group now has nearly 25 000 members and growing.