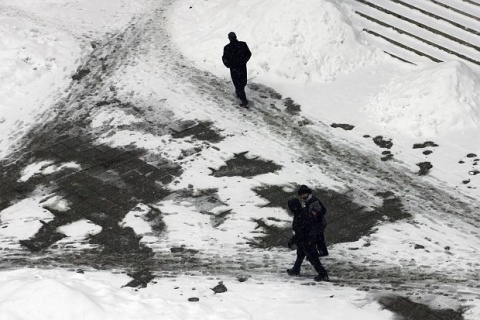 Over half of Bulgaria remains under code orange Friday over extremely low temperatures. Photo by Sofia Photo Agency

Seventeen Bulgarian regions remain under code orange over extremely low temperatures, the National Institute for Meteorology and Hydrology at the Bulgarian Academy of Sciences (BAS) has announced.

A more moderate code yellow has been issued for the rest of the country. Code yellow means potentially dangerous weather, where the forecast is not for unusual meteorological events, but requires people to exercise caution.

The emergency situation, prompted by strong winter storms, has been lifted for a number of municipalities in the region of Sofia and on the Black Sea coast.

The regions of Haskovo, Kardzhali, and Velingrad, where the most serious, and at places deadly, floods occurred remain under emergency situation.

The cross border points on the Turkish, Romanian, Serbian, Macedonian and Greek borders are open and function normally. Vidin, Oryahovo, and Nikopol on the Danube River between Bulgaria and Romania remain closed.

Tractor trailers over 10 tons are banned in the regions of Silistra and Haskovo and in a number of mountain passes; tire chains are required in these areas as well.